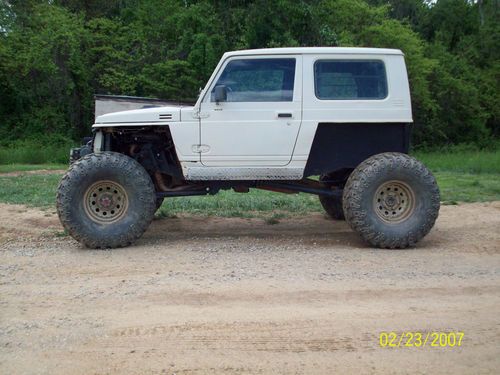 I have for sell a nice Samurai with a lot of good parts on it. The body is in decent shape. It is the tin top version. It has a roll cage built inside the cab. It has a 4.3 Chevy motor that can run on gasoline or propane with the flip of a dash mounted switch. It is real handy to drive it on gasoline and when you hit the trail you can flip it to propane and it will run on any angle. 4 speed granny low trans and a 205 transfer case make for a solid drivetrain. It also has Toyota axles under it. The rear is Lincoln locked with 4.10 gears and the front is 4.10 open. The wheelbase has been stretched and gives it a 0 approach and departure angle. The lower links are huge and I have never bent one or had any trouble with them but I'm not sure what they are made of but they are very strong. They have jonny joints on both ends. The upper link comes off of one of the lower links and mounts to the rear ends. It is not as beefy as the lower links but I have had no problems. The pan hard or track bars are huge and I don't see anyone breaking them either. Toyota steering mounted behind the front end so nothing can get hit on the trail. Coil springs on front and rear. It has a new set of 37" Iroks with no rock rash and 99% tread. These tires are practically brand new. 30 pound propane tank that I just filled comes with it. Badland winch on front that works great. This is a great rig just needs a new owner.