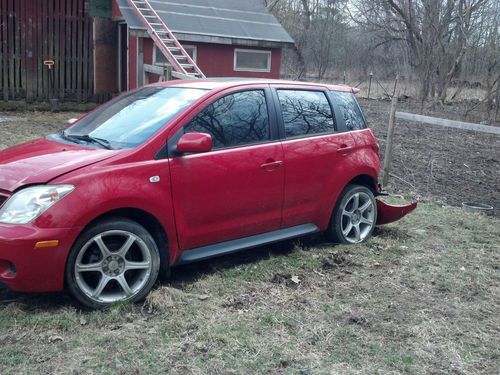 We're selling my wife's 2005 scion xa 1.0 realease series. It is a really neat little car and she hates to sell but with 4 children now it doesn't seem to practical to put back together.

So here's the good. Low miles 40907 and my wife has never been a racer. It is the first release series #972 of only 1550 made. In the 6 years we've owned it I've only seen one other. What the release series means is there is a handful of options that only came with that series; red exterior paint, sunroof, red stitching in seats, red interior lighting, special grill, custom 17" aluminum enki wheels. I believe it's the only xa that had a sunroof.

Now it has been in a little accident, I had a Navigator rear end me surprisingly it did more damage to the truck then car. By the looks to me there is no serious structual damage, but I'm not body man so take a good look at the pictures and if you need more just let me know. I'll try to list them best I can.

Front: bottom corner of bumper slightly dented, passenger fender damaged, passenger tire has slow leak. Rear: both tailights, bumper cover although support looks good, hatch damaged but glass and wiper good, tip of driver quarter panel damaged (possibly body worked). At one time I had all the parts priced on car-part.com all pretty inexpensive and readily available. It will need a battery and front tire is in trunk, has a slow leak so the donuts on it now, could use new tires before long I was starting to price them right before the accident. Well I believe that should cover it.                              Like said we hate to sell it but with our young army we've got going on it doesn't really work anymore, so if you're looking for a unique little car thats excellent on gas at a diy price this might be the one. We're keeping the reserve pretty low and open to straight offers, no low balling please it'll still books out pretty good with the rebuilt title. Thanks for looking.  I can help with shipping if needed, have truck and trailer, for a fair fee.

Customize a Scion, make it out of paper [w/video]

Shin Tanaka is a "Japanese artist, graffiti writer, paper toy creator, designer" with Kennedy Center credentials - his Paper Shaper sneakers are especially popular. Scion has done a DIY collaboration with Tanaka that can get you every one of Scion's five models as a Paper Shaper.
There are two ways to get in on the auto origami, the first being to stop by the Scion booth if you happen by one of the coming season's auto shows. Since that's a lot of work and waiting to acquire a perforated sheet of paper, you can also download the Scion Paper Shaper app from iTunes. In the app you can customize your model, complete with custom paper sneakers on the custom paper base, then print it out and build it yourself.
If you have any more questions, well, the video and photos below will put it all together for you.