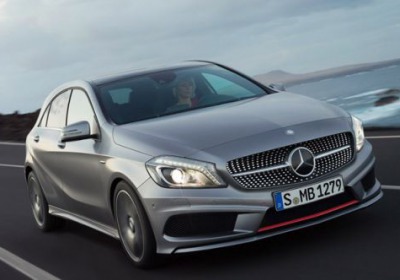 Judges for the World Car of the Year Award have narrowed down the finalists to just four vehicles. Out of a total of 42 entries, only the Mercedes-Benz A-Class, Porsche Boxster/Cayman, Scion FR-S/Subaru BRZ/Toyota GT-86 and Volkswagen Golf remain standing. For Volkswagen, this marks the second consecutive year the company has had an entry among the finalists, and the fourth time since 2009. In order to qualify, a vehicle must be on sale on two continents during the span of time between January 1, 2013 and May 30, 2013. A panel of 66 journalists from 23 countries then vote on the finalists.

Three vehicles have made the cut for the last round of voting on the 2013 World Performance Car as well, with the Cayman/Boxster and FR-S/BRZ/GT-86 running against the Ferrari F12 Berlinetta. Meanwhile, the Renault Zoe, Tesla Model S and Volvo V60 Plug-In Hybrid are duking it out for the World Green Car Award. Finally, the World Car Design of the Year Award is up for grabs between the Aston Martin Vanquish, Jaguar F-Type, and the Mazda6. Check out the full press release below. Overall winners will be presented at the 2013 New York Auto Show.

At a press conference hosted by Bridgestone Corporation and the New York International Auto Show at the Geneva International Motor Show, the top finalists for the World Car of the Year, World Performance Car, World Green Car and World Car Design of the Year awards were announced today.

The overall winners in all categories will be declared at the New York International Auto Show on Thursday, March 28, 2013.

World Car of the Year

From an initial entry list of forty-two new vehicles from all over the world, then a short list of ten finalists, the top contenders for the overall 2013 World Car of the Year title have been revealed. "In the voting for this year's WCOTY award, we saw a very closely fought race which resulted in not three, but four finalists!" explained World Car Awards co-chair, Peter Lyon.

This is the second consecutive year that Volkswagen is in the top three position and the fourth time since 2009. The Volkswagen UP! was the 2012 World Car of the Year.

To be eligible for the overall World Car award, the candidates must become available for sale on at least two continents during the period beginning January 1, 2012 and ending May 30, 2013.

Vehicles are selected and voted on by an international jury panel comprised of sixty-six top-level automotive journalists from twenty-three countries around the world. Each juror was appointed by the World Car Steering Committee on the basis of his or her expertise, experience, credibility, and influence. Each juror typically drives and evaluates new vehicles on a regular basis as part of their professional work. All hold significant stature within their own regions and countries.

Entrants may be chosen from that list of eligible vehicles, or they may be newly introduced variants that satisfy the same criteria, but are derived from existing rather than brand-new models. In all cases, they must have a minimum annual production rate of five-hundred (500) vehicles.

The World Green Car award is presented by Bridgestone Corporation (Japan). Ryoji Yamada, General Manager of Brand Management said, "We are very pleased and honoured to sponsor the 2013 World Green Car award. The environment is everyone's responsibility. And throughout our global family of companies, we take this responsibility very seriously. We believe it is our mission to serve society with superior quality... not just with eco-friendly products but also in the way we produce those products and the way in which we support our many communities with environ mentally-friendly activities such as wildlife habitats and our Lake Biwa initiative in Japan".

Due to the complexity of some of the 'green' technologies, five green experts were appointed by the World Car Steering Committee to extensively review all documentation and specs associated with each candidate. They then create a short-list of finalists for review by the sixty-six (66) jurors in their second round of voting in February. The five green experts were in alphabetical order: Phil Berg (USA - PopularMechanics.com),

World Car Design of the Year

Cars eligible for the 2013 World Car Design of the Year award are taken from the list of World Car candidates or they may be included as a stand-alone entry provided the vehicle is introduced and available for sale in at least one major market during the period beginning January 1, 2012 and ending May 30th, 2013.

A design panel consisting of five highly respected world design experts was asked to first review each candidate, and then establish a short-list of recommendations for the jurors. The design experts were: Masatsugu Arimoto (Japan), Silvia Baruffaldi (Italy), Gernot Bracht (Germany), Sam Livingstone (UK) and Tom Matano (USA). Jurors then voted on the experts' recommendations.

The top three design finalists as chosen by the jurors are, in alphabetical order: the Aston Martin Vanquish, the Jaguar F-Type and the Mazda6. Aston Martin previously won the 2011 World Car Design of the Year award for the Aston Martin Rapide.

About the World Car Awards

Now in their ninth year, the annual World Car awards have become one of the world's most prestigious, credible and significant programs of its kind.

The awards were inaugurated in 2003, and officially launched in January 2004, to reflect the reality of the global marketplace, as well as to recognize and reward automotive excellence on an international scale. The awards are intended to complement, not compete, with existing national and regional Car of the Year programs.

The awards are administered by a non-profit association, under the guidance of a Steering Committee of pre-eminent automotive journalists from Asia, Europe, and North America. Peter Lyon (Japan) and Matt Davis (Italy) are the co-chairs; John McCormick (USA), Jens Meiners (Germany), Mike Rutherford (U.K.), Eddie Alterman (USA), and Gerry Malloy (Canada) are the directors. There is no affiliation with, nor are the awards in any way influenced by any publication, auto show, automaker, or other commercial enterprise.