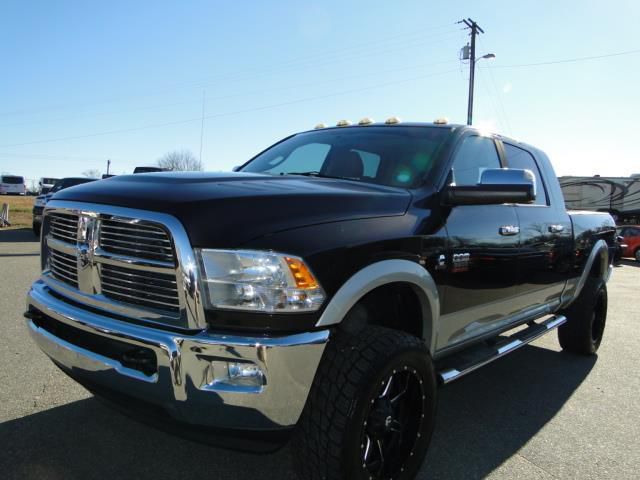 Feel free to ask me any questions about the car : gertudegmmccard@ukpoets.net .

IS A 2011 DODGE RAM LARAMIE 3500
HD, MEGA CAB 4X4 TRUCK, WITH A 6.7 TURBO DIESEL ENGINE. THIS TRUCK WAS PURCHASED FROM THE INSURANCE AUCTION WITH
LEFT REAR DAMAGE, WHICH HAS BEEN REPAIRED, SO IT WILL COME WITH A REBUILT SALVAGE TITLE. THIS TRUCK HAD BEEN HIT ON
THE LEFT BED SIDE AND LEFT REAR WHEEL. WE DID HAVE ALL OF THE PARTS HERE TO REPAIR THIS TRUCK, SO WE SENT IT OUT TO
A LOCALE SHOP AND HAD IT REPAIRED. WE HAD THE COMPLETE REAR BED REPLACED, AND THE COMPLETE REAR AXLE. THIS TRUCK
DOES RUN AND DRIVE PERFECT WITH ABSOLUTELY NO PROBLEMS AT ALL. LOOK OVER ALL OF THE PHOTOS THAT I HAVE INCLUDED
WITH THIS LISTING, SO YOU CAN SEE FOR YOURSELF JUST HOW NICE THIS TRUCK IS. TRUCK IS A LARAMIE LONGHORN EDITION SO
IT IS LOADED WITH LOTS OF OPTIONS. IT HAS POWER WINDOWS, LOCKS, MIRRORS AND SEATS. IT HAS STEERING WHEEL CONTROLS
FOR THE RADIO AND CD. IT COMES WITH A BUILT IN ELECTRIC BRAKE CONTROLLER. THE SEATS ARE WRAPPED IN TAN LEATHER THAT
LOOKS GREAT AND THE FRONT AND BACK SEATS ARE HEATED, AND THE FRONT SEATS ARE ALSO COOLED AS WELL. THIS TRUCK HAS
NAVIGATION WITH BACKUP CAMERA. THERE IS STILL LOTS MORE THIS TRUCK HAS TO OFFER ANYONE