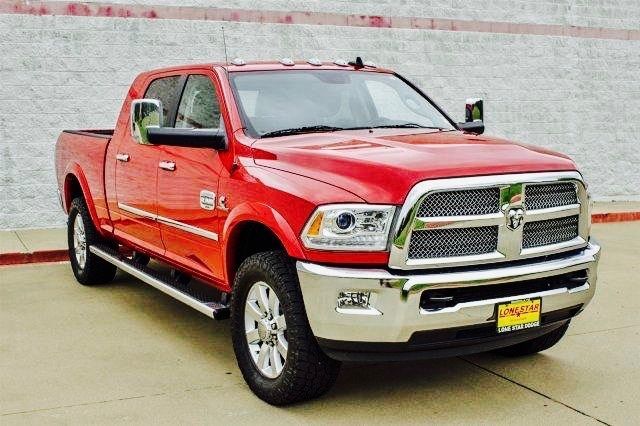 Send me an email at: jettabourn@netzero.net .

I have this rare Ram 3500 SRW Longhorn 4x4 with the Cummins and Aisin transmission. I have added brand new Toyo
Open Country ATII tires 35/12.50/20.
Mega Cab! Cummins 6.7L I6 Turbodiesel, 4WD, Navigation System, and Premium Leather-Trimmed Bucket Seats. Like new.
Diesel! This fully-loaded 2014 Dodge Ram 3500 Longhorn Mega Cab is the terrific condition truck you have been
hunting for. You can put stock in this one. It is equipped with features such as 4WD, Cummins 6.7L I6 Turbodiesel,
Navigation System, and Premium Leather-Trimmed Bucket Seats Aisin transmission.

The Ram 1500 EcoDiesel shot out of the gate with strong sales by filling its initial allocation of 8,000 orders in just three days, in February. At the time, Ram expected that the oil-burning variant would account for around 10 percent of 1500 output, but it knew there was room to grow if the demand was there. Apparently it is, as the truck maker is doubling the diesel's production mix for the 2015 model year to 20 percent of the pickup's total volume.
Since hitting the market, the EcoDiesel has been a smashing success, according to Ram. The company claims that nearly 60 percent of its sales have been conquests from other truck brands, and its popularity has boosted the 1500's average transaction price, as well. In an accompanying video, brand president Bob Hegbloom said that customers have been demanding more of them.
"Innovation sometimes comes with risk, but being first to market with a diesel engine for the half-ton segment has shown to be a great decision for the Ram Brand," said Hegbloom in the company's release.

Some recalls we report on are bigger than others. This one involves a big vehicle, but only 159 of them. No, not 159,000. Just 159.
The vehicle in question is the Ram 1500 - specifically the 2014 model, and more specifically than that, those made over the course of 12 days in late January and early February of this year. According to the statement below, Chrysler was notified by one of its transmission suppliers that a small shipment of gearboxes might have difficulty shifting into Park.
Although the Auburn Hills, MI-based automaker says it is unaware of any accidents or injuries having resulted from the issue, and has not received any specific complaints, it is notifying the owners of the 159 trucks in question to bring their pickups in for service and, if necessary, to have the entire transmission replaced.

Vehicles that perform well in road tests by some of the most popular automotive publications, such as Car and Driver, Motor Trend and Automobile, don't always score well in in Consumer Reports' more regimented, practical test procedures, so the Ram 1500's climb to the top of CR's scoreboard is a boon for the well-received pickup truck, which CR also put on its "recommended" list.
To start off with, the freshened 2013 Ram 1500 has a lighter, stiffer chassis than before, and the four-wheel-drive Crew Cab that CR bought and tested performed flawlessly and achieved class-leading fuel economy (15 miles per gallon) with the 5.7-liter Hemi V8 - the most popular engine choice for the 1500 - and the new eight-speed automatic transmission. The unique-in-its-class rear coil spring setup endowed the truck with "one of the best rides of any pickup," CR reports. That helped it earn its class-leading road-test score of 78, well ahead of the nearest competition still in production, the Toyota Tundra (69) and the Ford F-150 (68). It's worth noting, however, that the Chevrolet Avalanche outscores the 1500 by two points (80), but production of that vehicle ends after the current 2013 model year.
About the only things the publication could find wrong with the truck were a heavy tailgate and a high step up into the cabin. Get ready for the next round later this summer when CR is finished testing the 2014 Chevrolet Silverado, which is doing well so far in the publication's tests.