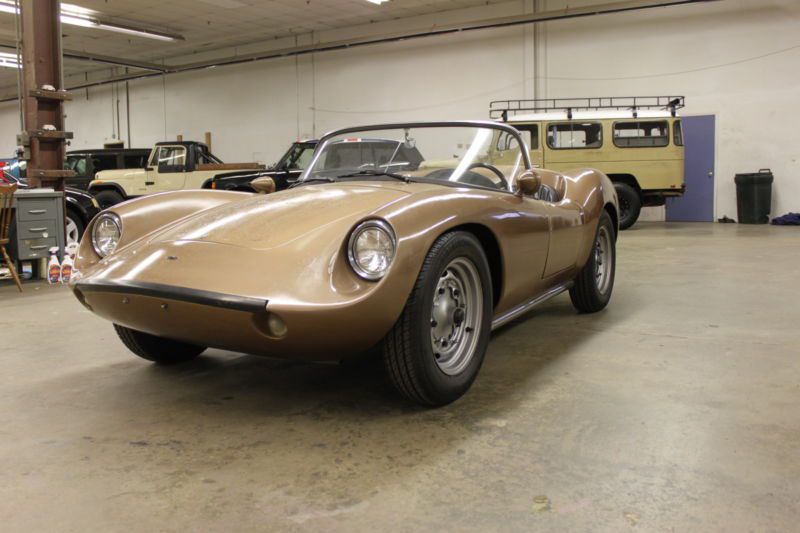 ** 1960 DEVIN SPYDER SPORTS CAR **
THIS RARE ALTERNATIVE TO A PORSCHE 550 AND MORE AFFORDABLE DEVIN SPYDER SPORTS CAR / CLUB RACER WAS DROPPED OFF TO
US BY ITS CURRENT OWNER WHO IS ROTATING HIS COLLECTION… NOT YET HAVING A CHANCE TO FIND OUT THE EXACT HISTORY
OF THIS PERTICULAR CAR – THIS IS WHAT I KNOW:ABOUT OUR CAR:
THE PAINT APPEARS TO BE ORIGINAL , ALTHOUGH DOES SHOW EXTENSIVE AGE & CRACKING OF THE PAINT… THE OVERALL BODY
AND PANELS ARE VERY NICE AND FREE OF DAMAGE. DOORS LINE UP NICE , OPEN AND CLOSE VERY PRECISE. LOCKABLE FRONT
& REAR BONNET ALSO HAVE NICE GAPS, BUT HAVE NO SUPPORT TO KEEP OPEN. PERIOD CORRECT WHEELS & TIRES ARE VERY NICE
WITH PLENTY OF TREADWEAR. UNDERCARRIAGE APPEARS TO BE VERY SOLID. ENGINE BAY ALSO VERY SOLID.
APPEARS TO VW POWERED- DO NOT KNOW WHAT SIZE THE MOTOR IS, WHAT’S BEEN DONE TO THE MOTOR OR HOW MANY MILES ON THE
MOTOR ? DO NOT KNOW WHAT TRANSMISSION IS ( IT IS MANUAL- REVERSE IS LOCATED DOWN & TO THE LEFT ) OR WHAT ALXES
ARE ? TRANSMISSION / CLUTCH ENGAGMENT IS NICE & SMOOTH. EMERGENCY BRAKE DOES ENGAGE. BRAKE PEDAL DOES FEEL
LIGHT.
INTERIOR IS AS BASIC AS YOU CAN GET- NOT SURE IF SPEEDOMETER WORKS? BUCKETS SEATS ARE IN GOOD SHAPE. DOES NOT
HAVE INNER DOOR PANELS. DO NOT KNOW IF LIGHTS OR WIPERS WORK ? FRONT BONNET DOES HAVE WHAT APPEARS TO
COMPLETE SOFT TOP , BATTERY AND FUEL FILLER CAP.
I WOULD RECOMMEND THE CAR TO BE GONE OVER / SAFETY INSPECTED BEFORE JUMPING IN AND DRIVING ON PUBLIC ROADS. CAR
DOES HAVE VIN PLATE ON DRIVERS DOORS SILL AND CLEAN NJ TITLE WITH DOCUMENTED 66,000 ORIGINAL MILES.
QUICK START UP AND WALK AROUND VIDEO: