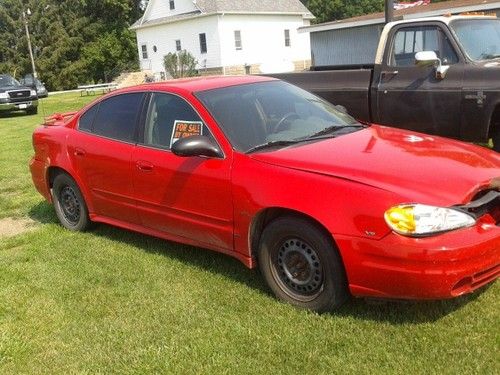 THIS IS A 2004 PONTIAC GRAND AM IT HAS BEEN AROUND THE BLOCK BUT WITH A LITTLE FIXING WILL KEEP BEING A GOOD CAR, IT HAD HIT A DEER AND ALL THAT WAS REPLACED WAS THE HEADLIGHTS, DID SOME MECHANICAL WORK TO IT LAST YEAR PUT NEW FRONT DS STRUT ON IT AND NEW PLUGS AND WIRES, ALL NEW BRAKE SYSTEM INCLUDING BRAKE BOOSTER,MASTER CYL, DRUMS, ROTORS, CALIPERS ON FRONT WITH NEW RUBBER LINES, CHANGED REAR WHEEL CYLINDERS AND LEFT REAR BRAKES THEY WERE GOOD, ACCIDENTLY RAN INTO REAR OF CAR AND HAD TO CHANGE PS TAIL LIGHT. ALL IN ALL THIS CAR WAS PURPOSELY A WORK CAR I DROVE IT OVER 80 MILES A DAY AND IT NEVER LET ME DOWN AFTER ALL THE BRAKE WORK, FOR SOME REASON IT STILL HAS A STICKY CALIPER IN THE FRONT DRIVER SIDE, I GAVE UP ON IT THE CAR HAS NO AIR CONDITIONING SO I QUIT DRIVING IT WE NO LONGER NEED THIS VEHICLE AND IT WOULD MAKE A 16 YEAR OLDS BIRTHDAY TO HAVE SOMETHING TO DRIVE OR SOMEONE A DAILY WORK CAR, SHE DONT LOOK THE BEST BUT I AM VERY HONEST OF WHAT I KNOW IS WRONG WITH THE CAR.  THANKS FOR LOOKING AND GOOD LUCK BIDDING BUYER ASSUMES ALL RESPONSIBILTY AFTER AUCTION ENDS THEY MUST SET UP THEIR OWN SHIPPING ALTHOUGH LOCAL PICKUP IS AVAILABLE I WILL NOT SHIP VEHICLE NOR DELIVER!!!!!!