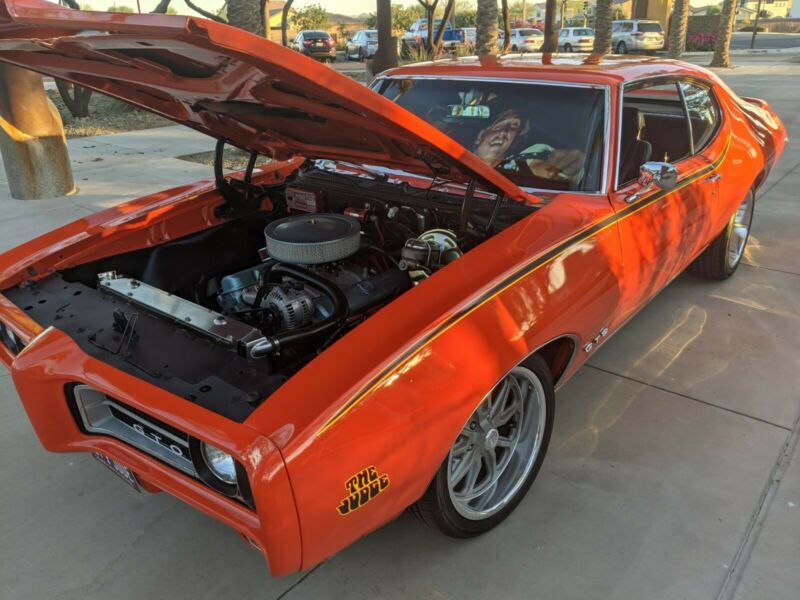 # matching 1969 GTO Judge! This car is amazing in every way!! All original parts are accounted

modifications made: 1.) Full Hoshtics sports suspension with Fox shocks and rear bags. 2.) Holley Snipper EFI Fuel
injection & Holley Snipper Air Filter 3.) Holley EFI Fuel tank with sending unit & pump 4.) 700R4 transmission &
shift kit 5.) American Racing wheels & new tires 6.) Custom made dual electric fans by Ron Davis 7.) CD player and
custom speakers 8.) New oversized alternator 9.) New booster pump & master cylinder 10.) New msd box, spark plus &
MSD wires 11.) New disc brakes up front 12.) New exhaust and flowmaster mufflers. See picture listing other work
completed on this amazing car to date!
Some key original parts: Original # matching 400 Ram Air III, Original # matching 4 speed (rebuilt & stored in
box), Original interior, Original body from what I can see. Again, all original parts have been kept when replaced.
This is your opportunity to have the best of both worlds, a slight restromod and/or change it back to all original
some day. All the original parts will be sold and shipped with the car. Overall in very good condition, good paint
with some small flaws front to back. First restore took place about 7 years ago including the paint.