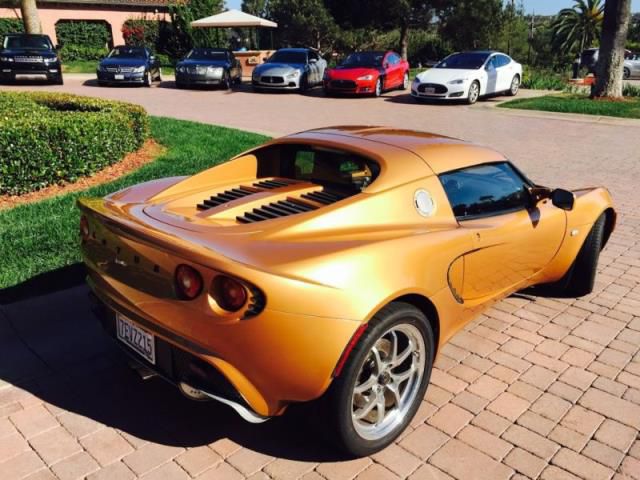 This 2005 Elise is one of only 5 or 6 in the US in this factory bronze color. It is in excellent condition and after a recent major service, is ready for months of carefree, summer driving. It comes with air conditioning, which generally won't be needed when either the removable hard top or the soft top (also comes with the car) are removed. The exterior is very clean and has only one or two minor rock chips. There is a clear protective film covering the nose of the car for additional protection. The major service was done last year and the car has been driven very little since (I drive it a couple of miles once every month or so to keep the battery changed and to keep the all mechanicals in good shape). Here is what was done during the service:New front rotors and padsBrake fluid system flushEngine oil changeGearbox oil changeCoolant system flushClutch fluid changeUnderside panels all removed and inspection of all fasteners/bolts etc.
For further inquiries please feel free to e-mail me at : odellbakerxkg@netzero.com

Some things just don't make sense. But then we're not sure they really have to. Imagine Porsche took the Cayman, which is essentially the coupe version of the Boxster, and turned it into a convertible. Wouldn't make much sense, would it? Well that's essentially what Lotus did with the creation of the Exige S Roadster.
The Exige, you see, was already the fixed-roof version of the Elise. So what was the point in turning it back into a roadster? That's what our friends at XCar tried to ascertain in the video below. We could tell you what conclusion they arrived at, but that would spoil all the fun. So we'll just let you enjoy the seven-minute clip and see for yourself. Just remember: it doesn't have to make sense. It just has to be a Lotus.