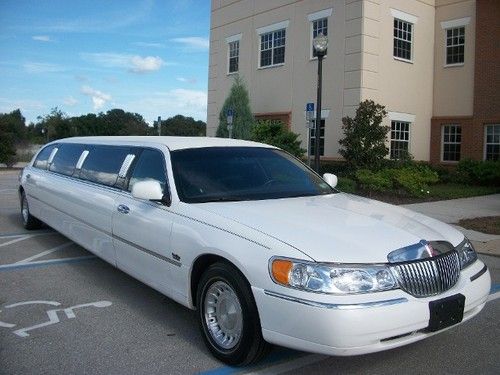 This limo has been completely upgraded since I've owned it with over $5,000 in extras that a typical 2000 Lincoln Towncar Limo doesn't have such as brand new RGB Operal Lights (invented myself), 15" flat screen LCD tv, 250 Double Density LED integrated lighting system with an RGB controller in back of the limousine, reupholstered seating in the last year, most up to date radio that is equipped for DVD/CD/MP3/IPOD/AUX/EVERYTHING!!!, and also a fresh coat of paint. It's a 120" stretch by Tiffany equipped to carry 8 to 10 passengers in the rear. The vehicle is a great and reliable limo that I currently use in my fleet now and the only reason I'm selling it is to upgrade my fleet to SUV Limos. If you have any questions or would like to know more please to don't hesitate to ask!! Sam, 863-430-8979