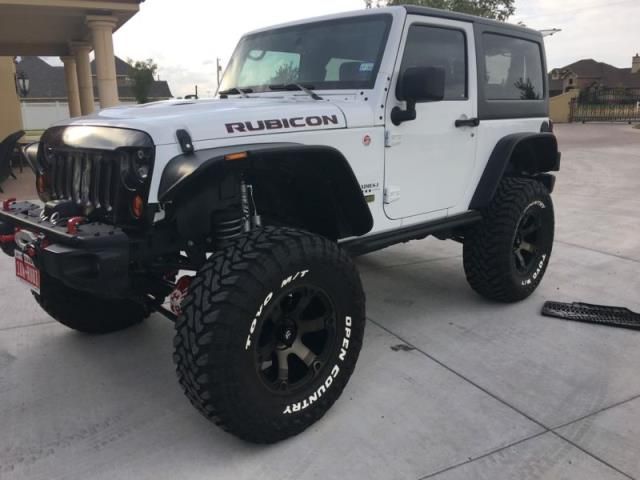 Selling my hard to find 2013 10th Anniversary Rubicon 2 doors JK, I hardly drive the truck and I need to sell it and or trade it for a newer model crew cab diesel pick up, this Jeep it is the 10th anniversary Rubicon jeep only 68 were made with these options, well taken care off, always garage kept, never off road, I have a TJ that I took off road 1 time to the jamboree here at Palo Duro Canyon, all the modifications done by a professional Shop here locally in Amarillo, spent more than got I got out of it I wanted a cool jeep to drive around and thats it before I knew it I spent too much in it.......but my loss is your gain, I just need to get me a diesel pick up for my work and need to down size personal vehicles cause kids are going to college now! Here are some of the extras that I had professionally done to the Jeep, because i pretty much bough it stock! I am the second owner, mature driver never off road. OVER $12K in add ons!! - 5.5 Lift Suspension short arm lift, Smooth ride, got adjustable arms that I wanted and track bars, pitman arm etc by the best avialable products RE springs ETC - adjustable arms by core 4X4 Red to match color of Jeep ( Included on the price of the lift) - FOX Shocks with reservoirs front and rear - Fox adjustable shock/steering stabilizer - new gears front and back to 4.88 - sleeved axles front and back - axle shafts chromolly G2 front and back - new heavy duty ball joints front axle - C gussets front - poison spyder oversized differential covers front and back for more fluid, Synthetic too! custom powder coated white spyder with red 10A red - all synthetic fluids brakes and all - AFE Air intake - Maximus 3 Plate for new front winch - 9,000 pound Smittybilt Synthetic rope and wireless controller Winch! - front JW speaker Headlights - Front JW Speaker Fog lights with brackets from Maximus 3 - Bushwacker flat fender flares - passenger and driver Grab bars - front weather tech mats ( Not shown on the pictures) - AEV pro cal Flash to calibrate the gear ratio to the right tire size - custom wrapped angry eyes grill with an American flag and skull (I have the original too if you want it) - 2 10 Subs in a sealed box - tuffy rear cargo plate to keep subs safe when I remove the top - Alpine PDX-V9, 5-Channel Extreme Power Density Digital Amplifier 4X100 watt RMS and 1X500 watt RMS sub - Apple car play Pioneer Deck with detachable face to take with you - 37X13.5R18 TOyo MT Tires added the tredwear.com real white letters lifetime on all 5 so you have option of white wall or black - Tires have more or less 2K miles on them they are new I bought the jeep when it had 19K miles I barely drove it - 18 Fuel Beast D564 Wheels with the original TPMS are installed in them to read pressure in the tires - teraflex Oversize tire carrier to handle the weight of the new tire - Tuffy keyed dropped down console lock box This vehicle is a head turner in the jeep community and I get compliments all the time hard to find any 10A on the road now days, Only serious buyers please
No call please. e-Mail : elwinmpxosborne@mynet.com