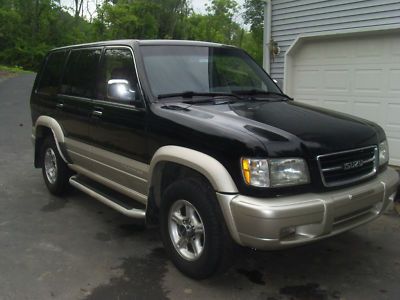 Condition: Used: A vehicle is considered used if it has been registered and issued a title. Used vehicles have had at least one previous owner. The condition of the exterior, interior and engine can vary depending on the vehicle's history. See the seller's listing for full details and description of any imperfections. ...
*STOCK PHOTO* EMAIL FOR PICS

1999 Isuzu Trooper w/ performance package.
3.5L V6, 4x4 with torque on demand.
141,*** miles.
Exterior color: Black with matching color fenders and bumpers.
Will start and drive.
New starter.
New Battery.
New a/c compressor.
New exhaust valve on cylinder 3.
Water pump and timing belt replaced at 100k
Heated/ powered seats.
Leather: Driver side is cracked and peeling on the door side.
I love the 4x4
Has tow package. The factory harness shorted out. I wired the 4 pin light harness from the rear right tail light.
Has the skid plate package and a full spare tire.
Comes with 1 Factory/ original key, 1 Spare key made at a hardware store. Total of 2 keys for this SUV

The TR is missing from the TROOPER badging on the doors. So it says OOPER. It is a Michigan thing. I bought it this way. You can buy letters online if it bothers you.

Needs:
Has cosmetic blemishes, nothing terrible. No dents or cracks in the body panels.

Cylinder 6 misfire. Piston ring is cracked. Oil is just blowing by it.
Transmission fluid I assume is low. Will recommend a flush and filter replacement. Why so? It was shifting real hard into 3rd gear the last day I drove it. If I were keeping it I would investigate that issue further. IMO I don't think there is anything major going on with this problem. It does need addressed though and I can't guarantee a flush and fill will fix.
I have had the pinion seal replaced on the rear differential. It may need inspected. I add a couple ounces of fluid 1-2 times a year. Easy to do. 4x4 works flawlessly all the same.
Needs exhaust work. Needs muffler and pipe work.
I drive a 2 hour route for work. When I get home I add 2 quarts of oil every day I drive that distance even with the cracked piston ring. I cant afford the oil anymore and thus among the reasons I am selling this SUV. If you are going to drive this SUV and not fix the engine I would recommend getting the exhaust issue fixed and make sure you have a lot of oil to use. Go to the dollar store or buy Walmart brand or filter used oil or something to cut cost. I would say it burns 1 quart per hour of non stop driving. City driving you may stretch it out a little but you will have to stay up close and personal with checking the dip stick OFTEN!!!!
I imagine the person buying this SUV is going to run it into the ground or you will drop a new engine in.
Radio doesn't work. If you are car audio smart you probably could find the loose/ severed connection. Has factory 6 disc with pioneers in doors.
The power fold mirror only works on the passenger. If you are electronically inclined you may get the driver mirror folding again. Just don't go through a touch car wash. The power mirrors work on both sides.
Born and raised in Texas. Minimal rust.
Before and after the new a/c compressor install the check engine light would come on and say o2 sensor bank 2 or 1???....it is buried behind the engine block. My mechanic told me not to worry bout it. So when you use the air conditioning be expecting the check engine light to come on. It will go out after a couple trips.
Born and raised in Texas for 50,000 Miles
Then babied in West Bloomfield for 30,000 miles
Then I bought it with 80,000 miles
Now i'm selling it with 141,*** miles
Had the major maintenance items done at Datsun Doctor in Waterford, MI, they are a Asian import specialist.
I have tried to baby this thing the best I can. I don't know what could have been done to avoid the cracked piston ring. It just kills me that it happened and I have to move on with my life.