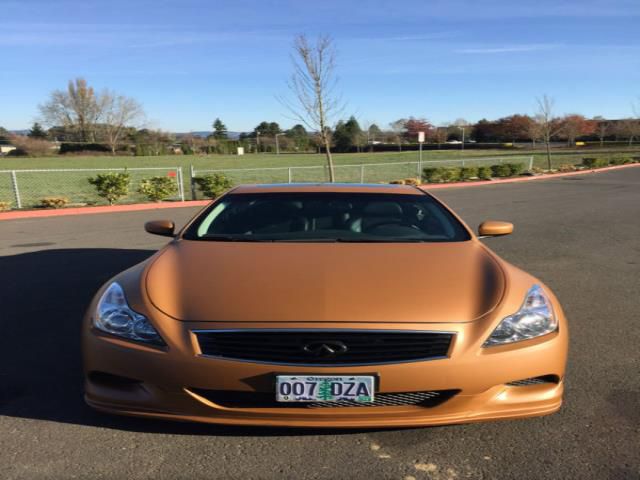 I bought the car new and have since put a lot of upgrades on it. Car is in great shape with very low miles. Underneath the custom copper vinyl wrap, is flawless oem black paint. The motor is fully built, with 9:1 compression and has a custom twin turbo kit. It has twin 2871 turbos that make 625 HP @ 24lbs of boost on race gas and 500 HP @ 18lbs of boost on pump gas. Its tuned on UpRev. Its sitting on 20" Vossen wheels. Lowered on KW coilovers. Also has a Passport laser/radar detector. Also has a custom stereo setup: The source signal is interfaced to the Audison Bit One processor which is the heart of the system. This allows for a 32 band eq and time alignment. The Front door Panels have been modified to fit two sets of Audison Voce 6" components achieving loud clean sound for the front stage. The Door panels are finished off to mimic the factory panels and keep that stealth look. The trunk is home to 4 Jl audio 10" subwoofers , Audison Voce Quattro, and Audison Voce Uno amplifers. Since this is a show and go type install the trunk panels were completely were built from the ground up using Fiberglass and small amounts of MDF covered in black vinyl. Accent rings were covered in light grey to have a splash of pop appeal. There is hidden blue lights that come on when the trunk is open. By lowering the back seat, you are able to view into the trunk via a very cool triangle window so you can enjoy the blue lights and install from the cabin of the vechile. The entire G37 is sound prepped and tuned for a loud, clear soundstage, making the ultimate listening experience.

With the 2014 Infiniti Q50 going on sale this summer, Infiniti has finally released pricing for its all-new and newly named sedan. In base form, the Q50 will start at $36,450 (*including $905 for destination and handling), which represents a drop of $900 compared to the current G37 Sedan.
In standard form, the Q50 is available in base, Premium and Sport trim levels with each offering the option of all-wheel drive for an additional $1,800. All gas-only Q50s come with the automaker's excellent 3.7-liter V6 engine, but stepping over to the Q50 Hybrid gets you a smaller 3.5-liter V6 paired with an electric motor. The Q50 Hybrid, which is available in Premium and Sport trim levels only, will begin at $43,700 for a rear-wheel-drive Sport model.
Potential buyers who preorder and ultimately purchase a Q50 during the unspecified "program period" will also get a free iPad mini. Scroll down for the official press release breaking down all trim levels and price points.