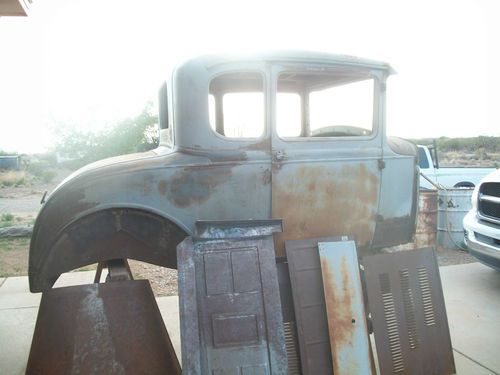 I am selling this hot rod for a lady friend whose husband has alhiemers and has been institulaized so my facts of what exact year the body is skechty.Here is what I do know there is no title for vehicle but will come / a bill of sale.The frame is custom made to fit this body,it has brand new GM 350 engine,auto tranny,and a ford 9" rear end with new goodyear tires and disk brakes all around. The master cylinder and fuel pump are attatched to frame with all plumbing done.There are a lot of parts included and remember that they are all brand new and it even comes with an extra set of chrome headers that will accept a larger diameter exhaust if wanted.There is a lot going on here and it would make a nice project for the right person and we have the paper work to show that a total of $46,000 has been spent on everthing you see in the pictures.The only things I could not locate is the carberator and wiring harness but if found will be included.However the wiring harness for the instruments is complete.Now for the legal stuff you know the dance.Shipping is your concern [the zip code is 88310] A $1,000 deposit withing 24hrs using Paypal and full amount in 7 days will work with you on that on how it is paid but vehicle does not leave premise until all obligations are met.Please e-mail any questions or call 575 434-5755 my name is Carl.