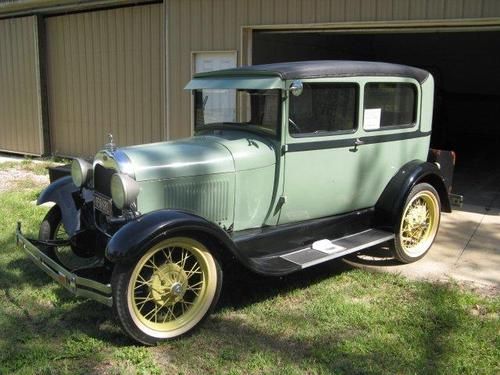 Condition: UsedA vehicle is considered used if it has been registered and issued a title. Used vehicles have had at least one previous owner. The condition of the exterior, interior and engine can vary depending on the vehicle's history. See the seller's listing for full details and description of any imperfections.Seller Notes:"THIS 1928 MODEL A 2 DOOR SEDAN IS IN GOOD CONDITION AS SEEN IN THE PICTURES AND RUNS AS GOOD AS IT LOOKS. CAR NEEDS HORN ADJUSTED OR REPLACED, WIPER MOTOR NEEDS REPLACING AND THE INTERIOR HAS 1 QUARTER SIZE HOLE THAT CAN BE REPAIRED.HAS A FLORIDA TITLE WITH 706 ACTUAL MILES, CAR NOW SHOWING 722 MILES"