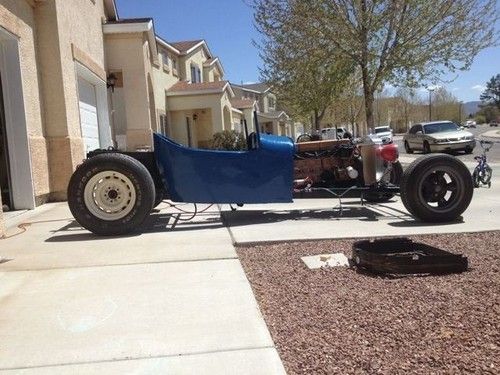 Get a great deal on a cool Hot Rod and finish my project.

Body: Old dirt track car from the 70s, Model A cowl Connected to an unknown back half. It looks really cool, by no means a show car but it is a really neat twist on a bucket. It is brush painted and looks pretty cool, it's all been buffed and wet sanded. Firewall needs some work, but otherwise a cool body.Chassis: 2x3 fabricated frame, simple but well built. Quarter elliptical front and rear. Rear is 8" Ford with triangulated upper bars. New Poly gas tank (spun aluminum style). New battery, completely wired car. Motor will crank right up. Front has a Ford axle, Radius rods and Speedway disc kit. New kingpins, steering linkage, etc. Steering is side steer using a VW bus box. Drive train: 250/Powerglide. Motor was rebuilt and driven in my Nova for appx 4k miles until put in this car. Professionally rebuilt in Spokane, WA. New alternator, regulator, aluminum radiator. Re-sealed the motor w/seals a couple weeks ago. Needs to finish: Master cylinder and hard lines routed, drag link, floors, steering wheel, windshield, seats, shifter.
All parts are new, this car seriously needs a weekends worth of work and you'll have a really unique hot rod that will turn heads everywhere. Finish this and save your self a ton of money! Below is what you'll need to finish the car. Summer is almost here and this car is going to be a blast to drive!  One last thing, this is bill of sale only. In NM pretty straight forward process to get a VIN/title on a fabricated chassis, they usually just do a quick inspection and I can help out with that part of it.
I will ship for free within 200 miles of Albuquerque, NM or deliver or assist with shipping in any way that I can. Feel free to email with any questions, I will be working away from my computer for the next week, but will be checking emails throughout the week. Thanks.