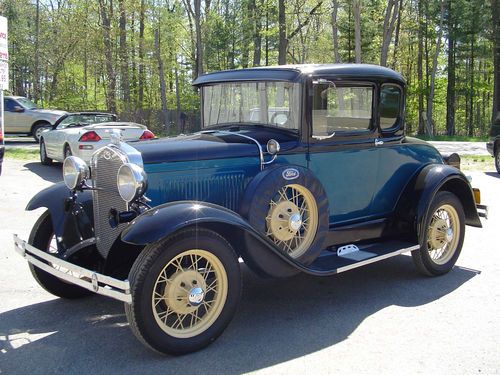 I AM A MODEL A COLLECTOR AND I AM SELLING OFF PART OF MY COLLECTION.  THIS 1930 FORD MODEL A COUPE DELUXE IS A BEAUTIFUL VEHICLE. IT IS AN OLDER RESTORE AND A SUPER NICE DRIVER.  THIS IS THE ONLY MODEL A I HAVE EVER SEEN WHERE THE ENGINE NUMBER MATCHES THE TITLE.  THIS IS VERY RARE. THIS CAR IS IN OVERALL GREAT CONDITION.   THE SHEET METAL IS IN EXCELLENT CONDITION AND IT HAS A NEWER REPLACEMENT HEADLINER.  THE REST OF THE INTERIOR SHOWS SOME FADING FROM AGE BUT NO WEAR.  THE CAR HAS ROLL DOWN BACK WINDOW AND WING WINDOWS.  THERE IS STONE GUARD TO PROTECT THE RADIATOR, ALSO IN GREAT CONDITION.  NEW BATTERY AND A NEW REBUILT GENERATOR.  NEW SPEEDOMETER AND I HAVE PUT 1000 MILES ON IT SINCE I HAVE OWNED IT.

THE RUMBLE SEAT IS IN GREAT SHAPE AS WELL AS THE TRUNK ON THE BACK.  THIS MODEL A WAS LOVED AND CARED FOR AND NOW IT IS TIME FOR SOMEONE ELSE TO ENJOY IT AS MUCH AS I DID.  I WILL BE SELLING SOME OTHER MODEL A'S FROM MY COLLECTION AS WELL.  PLEASE EMAIL WITH ANY QUESTIONS.  OR CALL 231-766-2111.  ASK FOR TRACY.