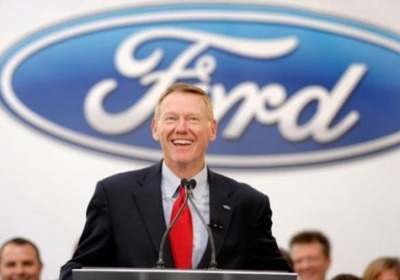 There have been rumors that Ford CEO Alan Mulally could assume the top job over at Microsoft, whose CEO, Steve Ballmer, will retire within the year. Mulally hasn't come out and said that he's considering moving to Microsoft after (or before) his contract with Ford through 2014 ends, but sources in the know say he's the front-runner to become the tech giant's CEO and has opened up to the idea more in recent weeks, AllThingsD reports.

Mulally is no stranger to Washington, where Microsoft is located, having worked in the state for Seattle-based Boeing Commercial Airplanes as CEO years ago. He also recently was an adviser to Ballmer in an effort to realign the company's management structure to help it become more competitive in a fast-changing computer hardware and software market. And when Ford developed its Sync digital interface, it tapped Microsoft to provide the operating system, Microsoft Auto. Perhaps the least crucial connection - but nonetheless an important one - is that Mulally still owns a house in the Seattle area, and it's been said he wants to return there, according to AllThingsD.

A main challenge Microsoft's next CEO will face is how to manage the company's numerous, fractured operations and, eventually, streamline them. But even on this front, Mulally has experience; after all, it was he who ushered in an era of global Ford vehicles, after the automaker had become complacent developing and selling vehicles by region leading up to the economic recession of 2008-2009.