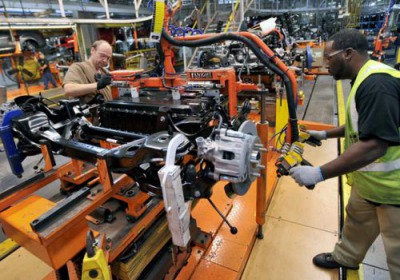 With its influx of popular new products made in the US, Ford Motor Company has announced that it intends to hire 2,200 new salaried workers domestically this year. This is the biggest increase of salaried workers for Ford in the last 10 years, and it is all a part of Ford's contract commitment to the United Auto Workers union to bring 12,000 new jobs to the US by 2015.

There were no specifics as to where in the US these job openings will be, but Ford did reiterate that it will be spending $773 million on equipment upgrades and capacity expansion at six plants located in southeast Michigan; as a whole, Ford is investing a total of $6.2 billion to its US assembly plants over the next couple years. According to recently appointed president of the Americas Joe Hinrichs, the new jobs will be focused on areas such as engineering, manufacturing and computer software. Ford will post its job openings online at careers.ford.com, and it will also use social media sites like Facebook and Twitter to recruit new workers, including military veterans.

Scroll down for more about Ford's planned job growth as well as how to go about applying for said openings.

The hiring is in addition to the more than 8,100 combined hourly and salaried jobs Ford added in the U.S. in 2012, as the company increased production capacity and expanded Engineering, Manufacturing and other areas to meet the growing demand for its fuel-efficient, high-tech vehicles. Approximately 1,000 of these positions were hourly jobs brought back to Ford plants in the U.S. from other locations, including suppliers in Japan and Mexico.

The company now is more than halfway to the 12,000 new U.S. jobs it committed to deliver by 2015 as part of its 2011 contract with the United Auto Workers.

"Our One Ford plan is designed to create profitable growth, and our new hiring is a direct result of our plan working," said Joe Hinrichs, Ford president of The Americas. "As we expand our product lineup of fuel-efficient vehicles, we need more people in critical areas – such as in a range of engineering activities, vehicle production, computer software and other IT functions – to ensure we deliver the vehicles people want and value."

Ford's U.S. hiring also will help support the company's global product momentum. Ford is committed to serving customers in all markets with a full family of vehicles offering the best in quality, fuel efficiency, safety, smart design and value.

To attract new team members, Ford is expanding its use of social media to reach new, technology-savvy workers, including such sites as Twitter, Facebook and LinkedIn. The company also is stepping up its recruiting efforts to reach military veterans.

All salaried job openings at Ford are posted on the Ford Careers website at www.careers.ford.com.

The company also announced in late December it is spending more than $773 million on new equipment and capacity expansions across six manufacturing facilities in southeast Michigan as it delivers on a commitment to invest $6.2 billion in U.S. plants by 2015.

The investments in Michigan will create 2,350 new hourly jobs and allow the company to retain an additional 3,240 hourly jobs. The 2,350 new positions also are part of the 12,000 hourly jobs Ford is adding across the U.S. by 2015.

"We are proud to expand our U.S. manufacturing operations in line with our aggressive new product introductions – and to create more jobs," said Jim Tetreault, Ford vice president of North America Manufacturing. "This would not be possible without the cooperation of our UAW partners. By working together, we have crafted labor agreements that improve our competitiveness and allow us to bring jobs back to Ford and the U.S."

About Ford Motor Company
Ford Motor Company, a global automotive industry leader based in Dearborn, Mich., manufactures or distributes automobiles across six continents. With about 172,000 employees and 65 plants worldwide, the company's automotive brands include Ford and Lincoln. The company provides financial services through Ford Motor Credit Company. For more information regarding Ford and its products worldwide, please visit http://corporate.ford.com.

See also: NHTSA closes probes on Jeep Grand Cherokee, Ford Freestar and Mercury Monterey, Would a Mustang-based Lincoln look like this?, IIHS says these are the safest cars of 2013.