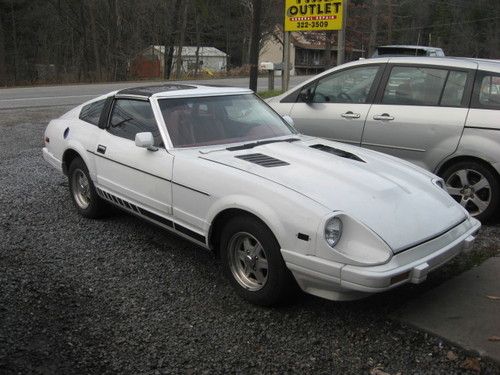 1982 DATSUN 280 ZX TURBO PROJECT CAR.  Vehicle body is in really nice, solid shape.  Interior is fair to good.  Vehicle currently does NOT run.  It was running, but poorly, with a lack of power.  We had vehicle in our shop and determined it has an engine timing issue.  The timing chain is not properly installed (off a couple teeth on the gears)  We were able to make vehicle run for a few minutes by turning distributor, but it is too far out to correct by moving the distributor alone.  Transmission and brakes on car are good.  When vehicle was running, it was apparent the turbo was spooling up and working.  Engine wiring harness was replaced with one from a donor car, along with the computer, and airflow meter.  Would make a nice project for someone with mechanical ability and knowledge.  Also might be good for an engine swap, v-8 project.  Tires are Kumho with better than half tread.  Wheels are Koenig aluminum and in good shape.  Many extra parts are included with this car such as: steering wheel, turn signal switch, hood insert, other trim, etc.  Car must be trailered.  Have clean title in hand.  No international bidders please.  Deposit due within 48 hours of auction end.  Please do not bid if you have negative or zero feedback.  Terms of sale are cashiers check, or cash in person.  Vehicle will not be released nor title transferred until check clears.  Thanks and good luck bidding!!.