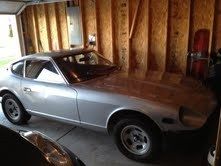 To much to list here , email me to get into the details. Here is the basics.

Fuel cell and battery relocated to the rear of car.

Car spent most of its live in Cali from 1971-2000 then from 2000-09 in Alabama. In the 90's it was refreshed from top to bottom. Seats redone , door panels , bushings , seals, paint and brakes. I bought the car last year and pulled the factory motor and put in the SR20 swap using McKinney Motorsports kit. Car is running and driving but needs updated gauges for speed and rpm. All lights and signals work. Also has r200 rear end upgrade , bigger front sway , suspension was replaced, new clutch master cylinder .

Email me questions at Brazilbro@gmail.com