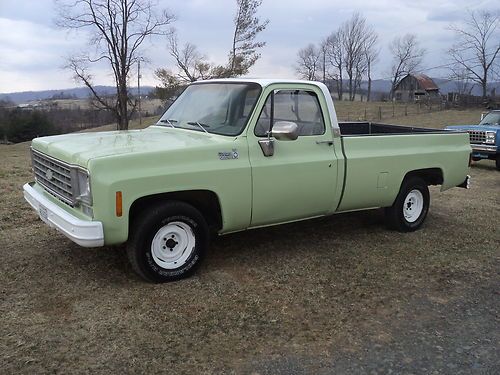 Has new leaf springs under it. There has been a plate of steel put where leaf spring mounts to frame as you see in the pics. Frame of the truck is otherwise fine.

New front fender on driver's side along with good cab corners.

Long bed with bed liner. No rust under the bed liner.

All gauges and lights work including back -up lights.

Horn does NOT blow (I think it's the horn itself).

Very sound and dependable truck with decent gas milage for what it is.  Being a 2wd helps.

I would be confident in telling you that you could fly here and drive it back home (where ever you may live).  Nearest airports are Charlotte, NC 1.5  hours away and Roanoke, VA 1.25 hours away.

THANK YOU!  And HAPPY BIDDING!

A friend of mine is listing this for me.  So, please call me (RICHARD) at 276-613-1570  with questions instead of sending questions to him.   I have more pictures that I can email or text to you.