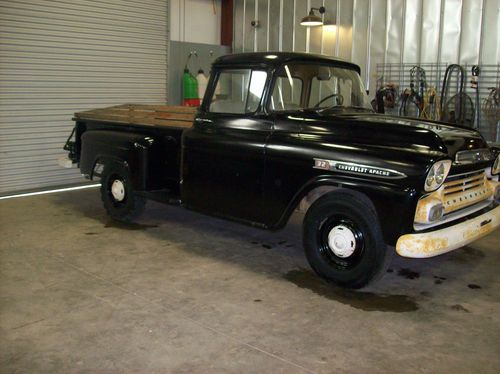 We are selling a 1959 apache 3200 step side long wheel base truck,  this truck was a one owner before we aquired it.This truck is all original  . It is one of a few made with original automatic trans mission. Truck has been painted one time in the past . As far as we can tell it has never had any body damage at all. The engine runs great we drive it weekly now since we have owned it but the rear engine oil seal leaks from sitting up for a period of time. The dash has never been cut or altered from its original state at all. The windows work great , doors are very tight the heater was bypassed when  we bought it we had on custom built so now it also works great.all lights inside and out work great, all the guages work also , except the speed ometer we will install new cable if purchased. We are a diesel and performance shop so if this truck is purchased we would be willing to remove engine and trans mission and completely rebuild at extra cost. This is a one of a kind we do hate to part with it but have to many toys already.