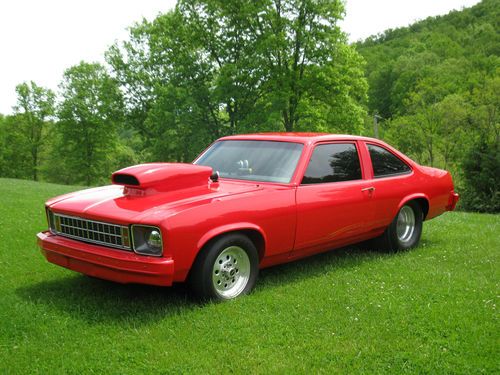 Condition: UsedA vehicle is considered used if it has been registered and issued a title. Used vehicles have had at least one previous owner. The condition of the exterior, interior and engine can vary depending on the vehicle's history. See the seller's listing for full details and description of any imperfections.Seller Notes:"small paint marks, trans needs to be adjusted"

I am selling my 1978 Pro Street Nova, this car has was done professionally before I bought it, it has a nick or two on the paint but It will turn heads every where it goes. We just took it to the local town parade were it was the featured car, this car sounds as good as it looks, it has a mean look to it, and the 383 SBC really fits the sound and look of the car, It has a Dana 60 with 456 gears, Strange axels,  M/T sportsman Pro rear tires 33X19.50Xn 15 big meats on the back, Fuel Cell and Batteries neatly placed in the trunk, Pete Jackson Gear drive, Power Glide Trans that needs to be adjusted, Hurst Shifter, custom seats with 5 point harness, Full roll cage with swing out bar to make it easy to get in and out of, full set of gauges, This car was done the right way, I am heading in a different direction with my cars so it has to go, Sorry No Trades.