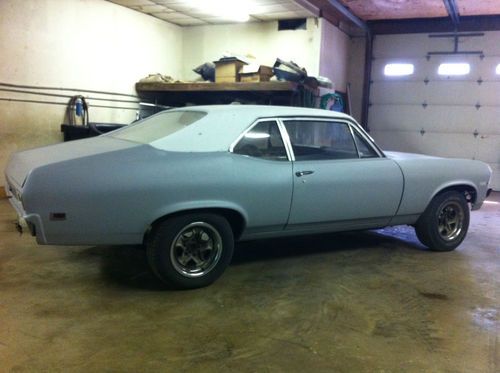 Condition: UsedA vehicle is considered used if it has been registered and issued a title. Used vehicles have had at least one previous owner. The condition of the exterior, interior and engine can vary depending on the vehicle's history. See the seller's listing for full details and description of any imperfections.Seller Notes:"This is a Project Car."

UP FOR AUCTION IS A 1969 NOVA SUPER SPORT - BIG BLOCK 4-SPEED CAR.  This car is non-numbers matching but year correct motor.  It has a M20 Muncie 4-speed with a 12-bolt posi.   The window and vinyl top trim as well as other various parts are in the trunk of the car.  This vehicle will need interior work and bumpers. Car is not running.  Just put motor and trans in the car.  This is a great start on a nice project.  Body work is finished.  This is a PROJECT CAR.  The pictures tell the story.

Car is being sold as is where is with NO warranty.  Buyer is responsible for picking up vehicle.  Buyer is required to pay a $500.00 non refundable deposit within 24 hours of end of auction via Pay Pal.  Balance to be paid at time of pick up.  CASH Only. The vehicle is being sold in the U.S. only.