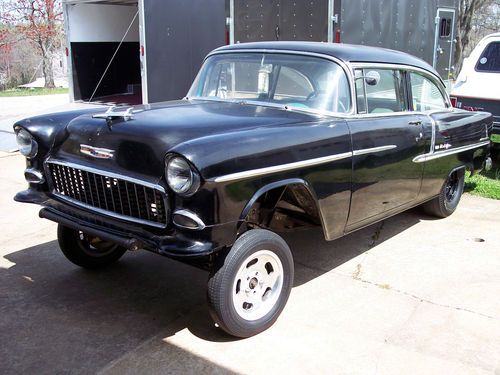 1955 CHEVY BEL AIR GASSER!!, Selling due to current health problems and unable to complete. Nickey Chevrolet Straight axle kit W/Disc Brakes, this is a much better axle than the Speedway product, steering arms alone are an inch thick, axle and roll cage are tack welded in place and needs final welding. Car is set up for big block or small block Chevy, firewall has been clearenced. Twelve bolt Chevy rear w/4:88 posi unit, SSM traction bars, Seamless frame, Good complete front bumper and brackets included as well as inner front fenders.
The car has all the original interior and original paint un-cut dash in nice shape. The rear trunk floor has been cut out for mini-tubs, but you can modify it to your needs, original gas tank in good shape has been modified for high-flow fuel lines, original drive shaft included.
Front wheels are 3-1/2" Gyros, rears are steelies w/nostalgic M&H Racemasters, also comes with 7"and 8" slots for rear to match front.
This car has raced for years with the stock front end, and you may have seen it at the Super Chevy shows, but recently started being converted to full Gasser!, Many extras to finish the car can be included at a additional fee, this consists of small block fenderwell headers, completely rebuilt Muncie 4-speed M-20 with rebuilt and re-chromed Hurst bench seat original style shifter, nostalgic Wedge co. cast steel blow shield, Ford HD re-inforced 9" rear housing for Tri-five chevys.
I would like to sell everything as one package if possible, all original glass is in great shape, does need some floor brace work, some bubbling on front fender eyebrows, and some bubbling in front of rear wheels, I was going to radius wheel wells, still has original rockers, and bottoms of front fenders are in good shape and has nice door bottoms.
This will make a great car when finished, most of hard work done!, Will give a great package deal on everything!!!!!!!!!!
I reserve the right to sell locally and end auction early.
Call or email Steve with any questions or extra pictures.    864-307-9093 , 978-870-7771     Thanks for viewing