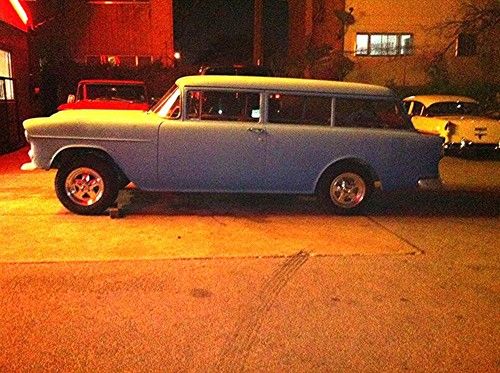 1955 Chevy 2 door wagon, NOT a Nomad. NO motor ,NO transmission, was V8 3 speed car , still has clutch pedal . stock front and rear suspension , manual steering and brakes , no interior but has all garnish molding and headliner bows, stock rear seat , low back Pontiac buckets up front , dash has gauges drilled into it , all good glass except drivers door, windshield is new as are the wheels and tires,( not my style but they were on the car) previous owner installed new front and rear floor pans and painted them with POR-15 and undercoating . body is nice , has some filler on it but no rust showing or rot , passenger side rocker panel just under the door is the only spot i was going to redo other than that she would make a nice street car. radiator support was cut to make room for a larger radiator but replacements are available , this IS a project car but is solid and would make a cool gasser, street freak or lowrider

buyer is responsible for ALL shipping , I will do my best to make myself available for you or your shipper to pick the vehicle up .
Certified bank check or CASH preferred  at time of pick up
U.S bidders only!
please ask any questions before bidding and check with anyone who might object to you buying this vehicle prior to bidding
thanks for looking