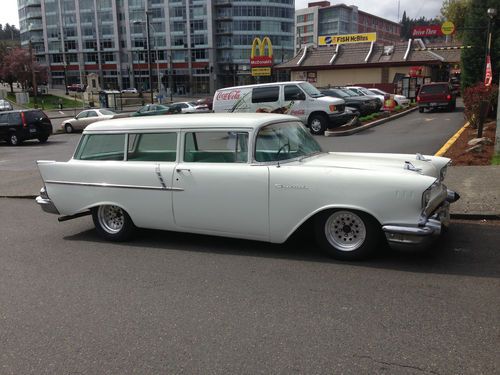 interior and body and paint just finished. Over 25,000 into the restore alone. All OEM factory parts used only. The exterior is not the original color for the car but is factory 57 . There is no rust in the body . We are relocating and that is the only reason I am forced to sell my pride and joy. It is a definate head turner and you don't see many nice 150's out there because everyone kept the nomad but not many people kept these in good condition. I have shipped cars all over the world and am not afraid to deal with international buyers as long as you can meet the time guidelines. Thanks 5038885565.
350 cu. in. Chevy motors
Power steering
power brakes
HEI ignition
Accel ignition coil
Rack and Pinion Steering
Chevy Nova front end
Ford 9' rear end
Camaro power steering
Body number 57-1263F