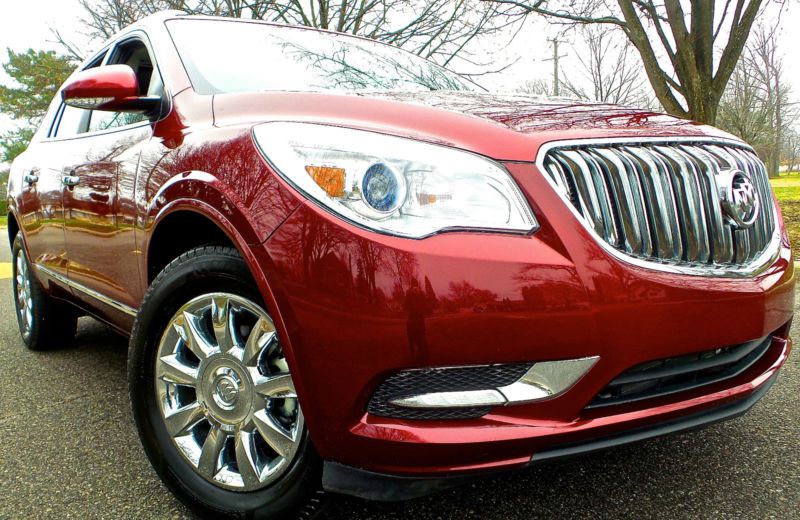 Enclave leaves outside noises where they belong. its Quiettuning technology helps reduce, block and absorb noise and vibration, so you’re left with the ideal environment for conversation or whatever sounds good to you. nothing stands between your ears and the available Bose 10-speaker sound system. engineered specifically for the enclave cabin, music sounds full and detailed, speech sounds natural and the system even approaches live performance levels without distortion.

Slide in and discover a new “low and away” instrument panel that creates a sense of wide-open space. its soft-to-the-touch feel makes you want to run your hand across its surface, while your eyes are treated to distinctive wood tones, chrome accents and ice-blue ambient lighting. enclave is built around comfort for short trips to the store or long journeys across the country. the driver and front-passenger seats offer optional heating and cooling and are power adjustable up to eight directions, including lumbar, so you can tailor enclave’s comforts to fit yours.

Enclave lets you personalize your listening options. call up music, news, sports and other features—just by saying the word. your voice is all you need to control the Buick intelliLink1 interactive audio system and even make hands-free calls. using Bluetooth,2 it connects your compatible smartphone to a high-resolution touch-screen. with the ease of advanced voice recognition (or steering-wheel-mounted controls), you have access to audio apps on your phone such as pandora internet radio or stitchertm smartradio, and siriusxm satellite radio3 (with 3-month trial). intelliLink also easily stores your mobile phone contacts. there’s even a usB port4 to connect your iphone® or digital music player. you’re doing all of this while keeping your hands on the wheel and eyes on the road.

IT’S GOT YOUR BACK, AND YOUR SIDES,TOO.
Enclave’s rearview camera system—conveniently located in the center-mounted information screen—gives you a heads-up of what’s behind you. the new available rear cross traffic alert makes you aware of oncoming traffic when backing up, while the optional side Blind Zone alert1 uses radar to warn you when a vehicle is in your side-mirror blind spot. and in an industry first, the driver’s seat side-mounted front center air bag2 adds another layer of protection by providing cushioning between you and your front passenger to help reduce injuries in side impacts.