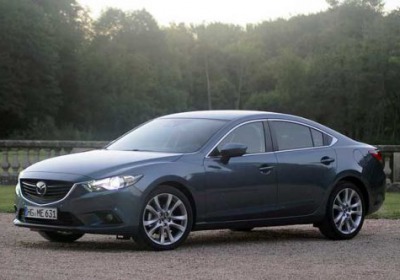 If you stop by your local Mazda dealer this month, with any luck, you'll see the much-anticipated 2014 Mazda6 parked in the showroom – there are already a few hundred of them out there. That's quite an accomplishment in light of the fact that it isn't even calendar year 2013. The move is part of a strategic decision by the Japanese automaker, which is hoping to capitalize on holiday showroom traffic. (The last five days of the year are typically among the busiest dealer days all year).

If you happen to spy the rakish sedan, you may notice something missing – a window sticker. That's because Mazda (like other automakers) can't legally display the Monroney on a 2014 model year vehicle until January 1, 2013. According to Autoblog sources, Mazda dealers are legally prohibited from letting you test drive until the start of 2013, so it's more of a sneak preview than anything else. Even so, we reckon shoppers will be impressed when they finally get a look at those window stickers – Mazda hasn't announced fuel economy figures yet, but Autoblog has learned that the 2014 model will carry a pair of impressive numbers: EPA estimates of 27 miles per gallon in the city and 38 mpg on the highway using regular gas.

Mazda dealers are legally prohibited from letting you test drive until the start of 2013, so it's more of a sneak preview than anything else.

Those figures mirror that of the CVT-equipped 2013 Nissan Altima, but with a bit more power – the document cites figures of 184 horsepower and 185 pound-feet of torque from the 2.5-liter Skyactiv four cylinder – figures that are down slightly from the 189 hp and 189 lb-ft overseas example we drove in October. Unlike the Nissan and many of its competitors, the engine can be paired with the buyer's choice of either a six-speed manual gearbox or automatic. Other key rivals, including the Honda Accord, Kia Optima and Toyota Camry fall short of the Mazda's economy numbers, though the Kia does offer a bit more power at 200 hp/186 lb-ft.

The 2014 Mazda6 fuel economy figures come courtesy of a "Display Vehicle Playbook" dealer document obtained by Autoblog from an anonymous source. A word of advice – don't bother trying to cajole your local salesman into an early sale or test drive. Those same dealer materials spell out in no uncertain terms that "there are SIGNIFICANT financial penalties that may be incurred should the vehicle be operated or driven prior to final invoice." Final invoices will be issued by Mazda district managers just before the car goes on sale January 2.

Unlike its rivals, however, the Mazda6 will only launch with one engine – there is no uplevel V6 or turbocharged gas I4 in the cards. However, Mazda has already confirmed a 2.2-liter Skyactiv turbodiesel powerplant, which is mentioned in the document as having "late 2013 availability." No fuel economy or power estimates are provided.

Company officials have confirmed to Autoblog that its dealers still have a substantial inventory of 2013 Mazda6 models on lots – around 7,000 units, or about a 100-day supply. With the much more advanced new model already on many lots – set to carry similar pricing – selling through the outgoing model is likely to be a challenge met only with substantial incentives.