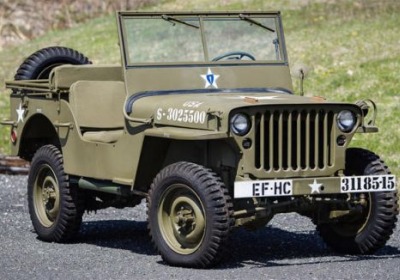 Fans of old military vehicles might want to pay extra close attention to the Greenwich Concours d'Elegance coming up this weekend. Crossing the Bonhams auction block on Sunday are a pair of seemingly flawless World War II Jeeps, which are both expected to fetch serious dollars.


Lot Number 305 at the auction is a 1945 Ford GPW Jeep that has been fully restored, which is expected to command between $35,000 and $45,000. Shortly after the Ford GPW, a potentially more interesting 1944 Willys MB (shown above) will be auctioned off, but Hemmings raises some red flags about this Jeep. First, it is claiming to have been "discovered in its original crate about 30 years ago," but there is no proof or documentation of any sort. Also, it is claiming to be all original, but it was given a paint job "shortly after it was discovered." Even with these questionable descriptions, this Willys could reach between $20,000 and $30,000. Head over to Bonhams' site and Hemmings for more information on both WW2-era Jeeps.