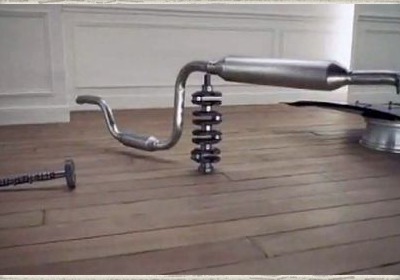 There have been many great car commercials over the years, but is it possible to define the best? Well, Ad Week recently took a crack at it by rating the top commercials of the year by looking at their view counts on YouTube, but Auto Express took a more democratic approach by putting the decision to a vote. Just after Thanksgiving, Auto Express came up with a list of the 20 popular commercials, and it tasked its readers with choosing the winner for the best car ad of all time. The winner? Honda's 2003 commercial for its then-new European Accord titled "The Cog."

While the ad never aired in the US, most car people have surely seen the impressive Rube Goldberg-style spot. In fact, the only commercial on this list that we saw on US television was the Volkswagen ad "The Force," but many of the others have become viral videos, including transforming and dancing Citroën C4. Of the 19 other commercials that vied for the title of best ad of all time, only the Ford Puma "Steve McQueen" commercial gave Honda a run for its advertising money.

Scroll down to watch Auto Express' top five commercial in order and to check out a press release, then let us know some of your favorite car commercials in Comments.

Auto Express, Britain's best-selling weekly car title, has today named Honda's 'cog' advert the best car ad of all-time. The 2003 ad for the Honda Accord took 31% of the votes in the poll of users of Autoexpress.co.uk. Ford's ad for the Puma featuring Steve McQueen took second place, while Peugeot's 206 advert, 'The Sculptor', was third.

Readers picked their favourite car advert from a list of 20 memorable adverts, shortlisted by the experts at Auto Express with the help of Richard Megson, creative director at the advertising agency Red Brick Road.

Steve Fowler, Auto Express editor-in-chief, said: "Honda's cog ad ticks all the boxes for car ads: it's incredibly watchable, clever and memorable with a great soundtrack, too. We're not surprised it came in at number one in our poll, but the size of the vote for it shows what a great ad it is."

Developed by creative advertising agency Wieden+Kennedy, the ad shows a cog rolling gently down a wooden plank, knocking into a larger cog. It sets off an incredible chain reaction in which a huge array of Accord parts knock, roll or swing into each other. The ad changed the perception of Honda and its drivers, with it proving so watchable you just don't want it to end.


Neil Christie, Managing Director of Wieden+Kennedy, was delighted by the result saying: "Fantastic news! That's the power of dreams in action."

The top 5 adverts as voted for by the Auto Express readers were: