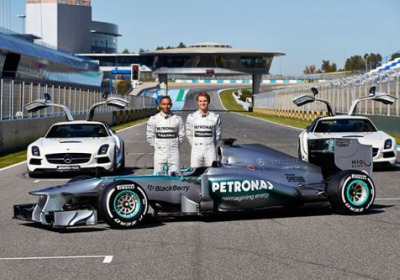 No indoor cocktail hour for the launch of the W04, the newest chassis built by the Mercedes AMG Petronas Formula One team. Instead, Nico Rosberg and Lewis Hamilton spent a morning in photo and video sessions at the track in Jerez, Spain then paused a moment to introduce the car. The team will want the W04 to demonstrate the World Championship credentials of the team personnel and one of the team drivers, instead of the mostly humble performances we've seen over the past three years.


Team principal Ross Brawn has called it "a clear step forward in design and detail sophistication," but as much as we truly respect Brawn's abilities and achievements, we heard him say similar things about the updated W03 last year before almost every race weekend from about mid-season. We really hope he's right this time, and so does the team's newest driver, Lewis Hamilton. We'll do our best to ignore the parallels of the Mercedes F1 team having signed a sponsorship deal with Blackberry, another company trying to find its way back to the top and still struggling, and just point you to the video below of the W04 in action.