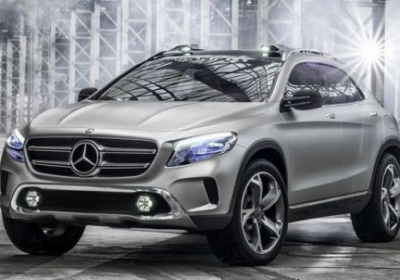 With just a few days left before the start of the Shanghai Motor Show, images of the Mercedes-Benz GLA Concept compact crossover have emerged online. The little 'ute is based on the small A-Class hatchback, and though it shares an identical wheelbase, is larger in every other dimension.

Looking like a rough-and-tumble five-door hatchback on the tippy toes of its 20-inch wheels, the GLA is most certainly destined for production in a toned down form that will borrow many bits and pieces from other cars based on this platform like the aforementioned A-Class and the CLA-Class sedan. Carscoop reports that the production version of the GLA will be revealed at the Frankfurt Motor Show in September of this year, with sales to the public starting in 2014.


Since it's based on the A-Class, we expect that the production GLA-Class will be powered by your choice of Mercedes' 2.0-liter turbocharged inline four-cylinder engine and a diesel or two, and will offer transmissions that include the company's seven-speed DCT and perhaps a six-speed manual (at least in Europe). If the GLA follows the same path as the two cars before it, expect a GLA45 AMG producing over 300 horsepower, as well. As for what powers the GLA Concept, that just might remain a mystery until the vehicle is officially revealed in China.

Stay tuned to Autoblog this Friday night and Saturday for our live coverage of the Shanghai Motor Show.