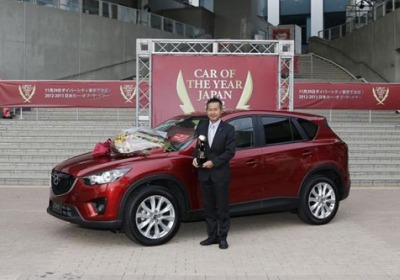 The Mazda CX-5 stamped its Kodo design and SkyActiv technology authority all over the Japan Car of the Year awards, taking the top prize ahead of the Subaru BRZ/Toyota GT 86. It is Mazda's second victory in the last ten years, the 2005 MX-5 claiming the same trophy, and the fourth time the Hiroshima company has won.

The award is decided by 60 local "automotive experts and journalists," and open to any passenger car released in Japan from November 1, 2011 to October 31, 2012 that has sold more than 500 units. Each judge gets 25 votes, his or her top vote getting 10 points, the rest of the points being spread among the judge's choice for the next best four cars.

The second-place getters were the Toyobaru twins with 318 votes, the surprise being they didn't beat or get any closer to the crossover. The Subaru BRZ did claw some mojo back, earning the Special Award given to cars that have made "an exceptional impact." The BMW 3 Series was third overall and won the Import Car of the Year award with plenty of room between it and the second place Range Rover Evoque.

The full list of winners is below, along with press releases from the organization and the manufacturers. Congratulations to Mazda on the win.

29/11/12 -- At the Japan Car of the Year awards ceremony inside Zepp Diver City on reclaimed land in Tokyo Bay, Mazda's all-new CX-5 posted 363 votes to win Japan's coveted Car of the Year prize.

Surprisingly, the expected close battle between this year's two most highly anticipated cars – Mazda's CX-5 and the Toyota GT 86/Subaru BRZ – did not eventuate as the SUV from Hiroshima pulled away from the jointly developed GT 86/BRZ sports car to triumph by some 45 votes.

While the Toyota-Subaru sports car picked up 318 votes for its thrilling rear-wheel drive handling, high revving boxer engine and reasonable price, it was the Mazda CX-5's revolutionary Skyactiv technology, great handling and economical clean diesel engine that most impressed the 60 jurors.

In accepting the Japan COTY trophy, the so-called 'Godfather' of Skyactiv technology**, Kiyoshi Fujiwara, said: "It was a long road. In the early days of Skyactiv development, I had a lot of opposition from colleagues suggesting this technology was not the answer. But we stayed true to our goals, and here we are today, fully recognised by the COTY jurors. Thank you!"

The BMW 3-Series – with 282 votes – snatched the Import Car of the Year gong away from a strong finishing Range Rover Evoque polling 218 votes, while the sentimental COTY steering committee special prize was awarded to the Toyota GT 86/Subaru BRZ.

Voting rules: Each juror is given 25 votes. The juror must give 10 votes to their highest rated car, and then spread the remaining 15 votes among their next best four cars.


** Skyactiv technology refers to a series of new body, chassis, engine and transmission technologies which increase fuel efficiency, reduce weight and emissions while improving the car's handling and ride quality. Skyactiv does not employ hybrid technology.

Mazda CX-5 wins Car of the Year in Japan

Leverkusen, 30 November 2012. Mazda Motor Corporation's compact crossover SUV, the CX-5 has been named the 2012-2013 Car of the Year Japan. The award was announced by the Japan Car of the Year committee on November 29, 2012.

The CX-5 was the first model to adopt the full range of Mazda's SKYACTIV* technologies including new engines, transmissions, body and chassis. It offers a predictable and refined driving experience together with outstanding environmental and safety performance. It is also the first model to fully embody Mazda's new design theme, KODO - Soul of Motion. With finely-honed vitality and dynamism, its styling is reminiscent of a cheetah about to pounce on its prey.

The CX-5 equipped with Mazda's new-generation SKYACTIV-D clean diesel engine boasts powerful driving comparable to a 4.0-litre V8 gasoline engine vehicle thanks to 420 Nm of maximum torque. At the same time, it achieves an SUV class-topping fuel consumption of 4.6 l/100 km with only 119 g/km of CO2 emissions.

In approximately nine months since sales of the CX-5 started in February, Mazda has received 37,000 orders in Japan, more than 33,000 in Europe and over 128,000 globally, and sales continue to be strong.

All passenger vehicles with an expected annual sales volume of over 500 units, announced or launched in Japan between November 1, 2011 and October 31, 2012 are eligible for this year's Japan Car of the Year award. The last Mazda to be named the Car of the Year Japan was the MX-5 in 2005. The CX-5 is the fourth Mazda to win the award.

Executive Officer Kiyoshi Fujiwara commented, "We are thrilled to have the CX-5 receive such a coveted award and appreciate the warm support and encouragement of our fans. Spurred on by this honour, we will continue to dedicate ourselves to the task of crafting cars that only Mazda can, in order to continue winning the support of our fans and customers into the future."

Developed with its product concept "Pure Handling Delight - the driving experience taken to a new level", the Subaru BRZ is a front-engine, rear-wheel drive sports coupe offering sheer driving pleasure with excellent handling, which is enabled by the ultra-low center-of-gravity packaging with the Subaru Boxer engine mounted as low as possible.

About 2012-2013 Car of the Year Japan "Special Award"
Selected from among all passenger cars newly released in Japan during the period from November 1, 2011 through October 31, 2012 by the Japanese COTY panel of jurors composed mainly of automotive experts and journalists.

Separately from the Car of the Year Japan award, "Special Award" is presented to recognize the car that has made an exceptional impact.