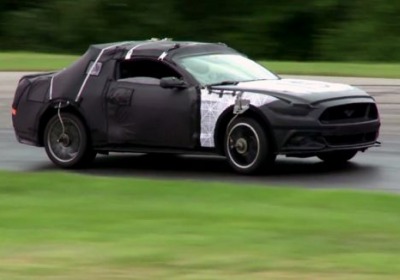 Now that we've finally seen the 2015 Ford Mustang, it's fun to go back and look at the spy shots we spent months pouring over, trying to dissect what was under all the camouflage. For the most part, Ford did a good job of concealing the car from spy photographers, and it released a video showing how much work went into doing so.

As crude as the Mustang's camo looked, all of the hard plastic, foam, vinyl and ratchet straps were actually created and put in place by a specific design team. The whole idea was to hide the car's identity, but it certainly ended up acting as a magnet for attention, too. According to Ford's press release, it took less than an hour for spy shots to appear online after the car was taken on public roads for the very first time – this is likely in reference to our first official spy shots of the Mustang from June, shown in the gallery below.

Scroll down for a press release and video, which shows footage of the 2015 Ford Mustang testing with minimal camouflage. This is probably the same track session where we got our first look at the Mustang's face back in August.


HIDING IN PLAIN SIGHT: KEEPING THE HIGHLY ANTICIPATED NEW FORD MUSTANG AWAY FROM THE PAPARAZZI

-The all-new Ford Mustang is one of the most hotly anticipated cars of the year, with everyone wanting to see what it looked like before it was even revealed

-When prototypes with final bodywork are built, engineers spend months testing the vehicles with padded camouflage and special paint jobs to hide the true shape

In the months leading up to the global reveal of the all-new Ford Mustang in early December, debating the exact shape of the car was one of the hottest topics for fans on the Internet. Helping fuel their speculation – while enabling the Mustang development team to log tens of thousands of test miles on public roads this past summer and fall without revealing the car's shape – was the job of the camouflage team from Ford design and engineering.

With more than 3,000 film and television appearances over the past 50 years, Mustang has the sort of on-screen résumé many in Hollywood would envy. Like those celebrities, when a new Mustang is on the way, the car paparazzi immediately mobilize in an attempt to capture the first photos for fan sites on the Internet.

"Ford designers and engineers spend a lot of time developing new cars, and part of my job is to make sure people don't see the result until it's completely ready," said Dave Pericak, Mustang chief engineer. "Professional spy photographers have been stalking prototype cars for decades, and now, the addition of camera phones has made it even more critical to hide our cars from prying eyes."

The chase is on
Getting an early look at highly anticipated new cars like Mustang is a cat and mouse game between automakers and a small cadre of automotive spy photographers that hide out for weeks on end in hopes of catching a glimpse of an upcoming vehicle that will tease fans.


"The professional photographers all know where the cars get built and where they get tested," said Pericak. "One photographer we see frequently parks in discrete locations with a view of these facilities, just waiting for something new to emerge."

With most people now carrying smartphones with cameras and Internet connections, just avoiding the usual photography locations is no longer enough.

"Before a single one of these test vehicles is allowed to leave the prototype plant, a camouflage package is developed and must be approved by the design, engineering and test track safety departments," said Al Wilkinson, Ford camouflage coordinator. "With all of the camo in place, even a good photograph should not give away the design details of the new car."

Initial camouflage development begins with the design team, and is then refined through engineering and safety. With Mustang, the first recommendation for camo was surprisingly minimal in an effort to keep weight and aerodynamic effects to a minimum.

"When I saw the first camouflage package the team suggested, I knew it wasn't good enough to counter the paparazzi, so we went back to the drawing board," said Pericak.

With too much of the new body revealed in the first camo package, the team quickly went to work to make sure the entire body was covered with black vinyl and heavily padded underneath with foam. The second proposal still showed the basic profile of the fastback roofline, something Pericak didn't want to have revealed this early.

The final camo package created for the new Mustang obscured the new fastback profile and proportions, making it appear more like a notchback, and smaller than it actually was. Pieces of plastic and foam were strategically placed beneath the vinyl to hide the true contours of the car.
"Safety is as important as security when testing prototypes," added Wilkinson. "Despite covering the body, we still have to make sure car lights and signals can shine through."

The vinyl panels have to be applied in a specific sequence to make sure there are no places for air to catch the vinyl and pull it up. With the new Mustang GT capable of hitting 155 mph, having the camo come loose at high speeds is a danger for both test drivers and bystanders.

In its final form, the camo package for the new Mustang weighed in at just 49 pounds, providing security without undue impact on the vehicle dynamics.

Professional photographers – who prefer to stay in the shadows or trees – acknowledge they can wait anywhere from minutes to months to catch a prototype, and patience is a virtue. When vehicle engineering manager Tom Barnes finally drove the first fully covered new Mustang out of the factory on a rainy day in June, it took less than an hour for photos of the car to begin turning up on automotive websites.

"After spending weeks refining the camo package for the Mustang, it was a bit frustrating getting snagged by the paparazzi almost immediately," said Barnes. "On the other hand, when we saw the photos later that day, it was a relief to realize you really couldn't tell what the car looked like."

Even with the lengths Wilkinson, Pericak and the rest of the team went to in order to obscure the shape of the new Mustang, sometimes a new car still needs to be tested without camo, and the only way to do that is a lot of late nights. Now that the world has seen the new Mustang, the engineers are free to complete the final months of development out in the open, camo-free, as the spy photographers have moved on to new targets.