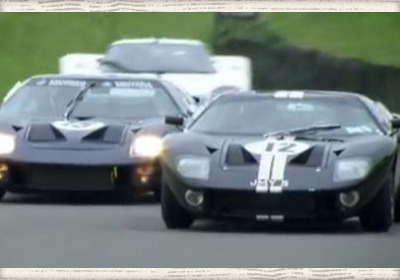 Is there a more iconic, American racecar than the Ford GT40? That may be a discussion for another day (although by all means, tell us how wrong we are in Comments), but this video of heaps of GT40s running in the Goodwood Revival races certainly has us thinking that Ford's Ferrari-killer might just be the best racer the Land Of The Free and Home Of The Brave has ever come up with.

That's completely ignoring the fact that the GT40 was largely developed by Brits using American money, but that's besides the point (there was also a rather brash Texan, who had a big role later in development). The resulting vehicle was dominant, besting the cars of Il Commendatore from 1966 to 1969, although it should be noted that Ford's GT40 was unable to beat Ferrari in its first two Le Mans outings in 1964 and 1965.


Those four years of dominance, which started with Ford sweeping the podium, were enough to establish the GT40's legend. And now, here we are almost 50 years later, celebrating the mid-engined monsters at Goodwood, in their first ever one-make race. Take a look below for the entire video.