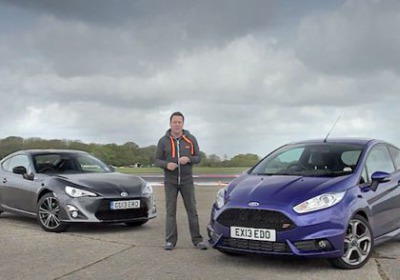 On the surface, there's very little that the Ford Fiesta ST and Toyota GT86 (or the Scion FR-S that is sold in the US, or the largely similar Subaru BRZ) share in common. One is a hatchback with power coming from a turbocharged engine routed to the front wheels. The other is a coupe with power coming from a naturally aspirated four-cylinder boxer engine routed to the rear wheels.

Thing is, both of them are reasonably priced performance cars aimed at a similar segment of the automotive marketplace, so a comparison isn't out of the question. It is with all of this in mind that we direct you to the video below, in which the blokes from Evo pit the two manic little machines against one another on a race track. The result? Well, it can be summed up this way: Fast versus fun.


See how the track battle goes down in the video below.