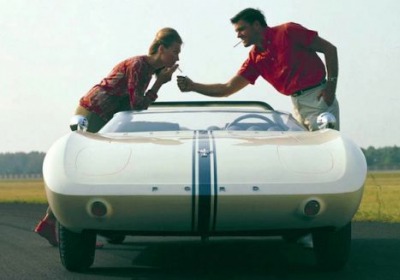 The Ford Mustang that we all know and love made major waves in the auto industry way back in 1964 by offering style and reasonable pricing with optional V8 power. Its long hood and short rear deck, combined with a low-slung and sporty cockpit, made a lasting impression in the minds of consumers and car designers alike, and its basic shape has so endured the test of time that it's still in use today.

This being the case, you may be interested to know that the first Mustang of 1964.5 wasn't actually the first Mustang at all, being preceded by a concept car that made its public debut in 1962. This concept was nothing like the car that would eventually make it into production, with a radical wedge shape and a small V4 engine sitting behind the car's two occupants, driving the rear wheels. In other words, the conceptual Mustang was pretty much the complete opposite of the production Mustang besides the name.


Ford has kindly decided go through its massive archive to bring the original Mustang concept back into the public eye. The company goes so far as to pose this question to fans of the pony car: "Should we borrow a few of these style elements for the next iteration of the Mustang?" Check out our image gallery above and then let 'em know what you think in the Comments below.

UPDATE: A video showing off the Mustang concept has been added below. Enjoy!