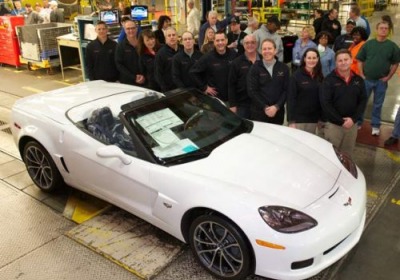 With all of the attention given to the 2014 Chevrolet Corvette Stingray lately, you could be forgiven for thinking that it's already well along in production, yet tooling up for the new C7 has only just begun. In fact, production of the outgoing C6 generation in Bowling Green, Kentucky just halted on Thursday.

As the C6 has aged, production numbers have predictably ebbed along with demand, but this year, the addition of the 427 and 60th anniversary models resulted in an uptick in vehicles built – this, despite a model year shortened by around 25 percent to accomodate the new model changeover. The final C6 Corvette ever, No. 13,466 built this year, was a white 427 Convertible destined for the General Motors Heritage Center museum. The car's 7.0-liter V8 heart was assembled by Corvette chief engineer Tadge Juechter himself.

In total, Bowling Green pushed out 215,100 C6 Corvettes over nine years. If you're still a C6 fan at heart and are hoping to get a good deal on a phase-out model, step lively – Chevrolet reportedly had about 6,100 unsold units, which Autoweek suggests is good for around five and a half months of supply at the model's current sales rates. Given that demand will likely slacken even further as the C7 draws closer, that should be a big enough stockpile to keep dealers satisfied until 2014 Stingrays begin showing up on their forecourts in December.

Yesterday, at 8:04 a.m., the last 2013 Corvette came off the line at the Bowling Green Assembly Plant. The celebration was short lived, as less than 30 minutes after the last car was built, workers began remodeling the plant to prepare for the launch of the all-new 2014 Corvette Stingray.

A total of 215,100 sixth-generation "C6" Corvettes were made at Bowling Green since production began in 2005, the last of which was the exclusive 2013 Corvette 427 Convertible Collector Edition outfitted with the 60th Anniversary design package. This package boasts an Arctic White exterior and a Blue Diamond leather-wrapped interior with suede-microfiber accents.

At the heart of the 427 Convertible is the 7.0-liter (427 ci) LS7 aluminum-block V8, which is handcrafted by skilled engine craftsmen at the GM Performance Build Center. For the LS7 destined for the last C6 produced, the engine was built by Corvette executive chief engineer Tadge Juechter.


The last C6 Corvette will join other historic General Motors vehicles at the GM Heritage Center in Warren, Mich.

"Leading up to the production of the last C6 has been all business," said Bowling Green plant manager Dave Tatman. "We take our job seriously and consider it the privilege that it is. But you can't do what we do and not get emotionally attached to the car."

Even as the team celebrated building the last C6, Tatman said there has been a great deal of anticipation and excitement toward building the all-new Stingray.

The task will require that 120 workers take just four weeks to turn the Bowling Green plant around, completing a job that usually takes months to accomplish. All employees are slated to return to work on March 25, where they will learn the entirely new process required to build the Stingray.

Bowling Green Assembly, which hosts up to 50,000 visitors a year, is currently closed to the public to facilitate the remodeling of the line. Tatman said he plans to reopen the plant to outside tours as soon as possible, knowing that everyone is excited to see this new generation of Corvette built.