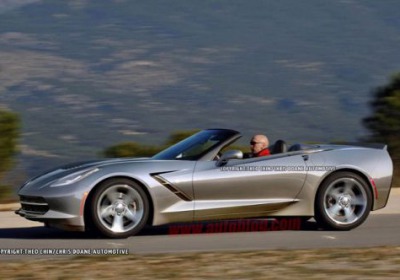 It was inevitable that we'd see the 2014 Chevrolet Corvette Stingray topless at some point, but that didn't make us any less interested when a pair of supposedly leaked official images showed up on theautoinsiderblog.com last week. We posted them on our Facebook page, but held off reporting on them here until we could get a little more information.

Those images, which feature a dark red car on a sterile black studio background, supposedly first appeared on the website of diecast model maker Maisto. A Chevrolet spokesman has been reported saying that they are "not official images released by Chevrolet PR," which isn't a denial they're the real deal, but neither is it a confirmation.


Close examination of the photos suggest they could be official shots of the Corvette Stingray Convertible, and while some have doubted their authenticity due to a lack of vents (which were seen on the C7s that debuted in Detroit last week), it could be that the images are of a base model car without the Z51 package that doesn't require the extra venting and cooling.

While we've waited to learn more, we had some artist friends of ours work up our own exclusive renderings that place a silver 2014 Corvette Stingray Convertible in a more natural, wind-in-you-hair (or not, in the case of our cue-balled driver) outdoor setting. Now in addition to imagining the topless C7 sitting in your all-black garage, you can visualize yourself blasting down a country road with the wind whipping through your, uh, eyebrows.