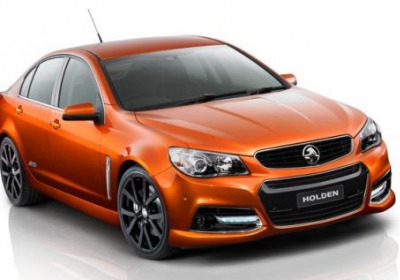 It won't be long before we see the official, production-ready Chevrolet SS sedan (hint: it will be revealed this weekend). And to tide us over until all of the official details are released about the US-spec version, we have this: the Holden VF Commodore SS V show car, a performance-oriented brother to the Calais V that debuted earlier in the week.

What we really want to know about the SS V is what lies underhood, but General Motors' Australian arm is keeping that under wraps until the Chevy model breaks cover this weekend. Nevertheless, it's obvious that the SS V will be a serious performer, with all sorts of aggressive cues driving that home on the car's exterior. Take a look at those 20-inch billet aluminum wheels that hide big Brembo brake calipers up front, the sculpted hood and front fascia, the wide air intakes with LED running lights and the quad exhaust pipes out back. It's like the Pontiac G8 GXP never even left us.

Inside, there's a sporty-looking interior with aluminum accents that mix in with black leather and suede surfaces, all tied together in the middle with an eight-inch MyLink touchscreen infotainment system. It looks great, and again, while we don't know anything regarding powertrain details, it makes us oh-so happy to see a manual shifter smack dab in the middle of the center console.

Stay tuned for the whole kit and caboodle when the SS sedan is revealed this weekend. For now, scroll down to read Holden's press release and click through the attached gallery to see the shape of Chevy things to come.

Holden has taken the wraps off its stunning new performance sedan show car ahead of the VF Commodore's international debut as the Chevrolet SS Sports Sedan in the USA this weekend.

The SS V has a mature, new aerodynamic exterior design, which has been finished in eye-catching custom Fantale orange metallic paint specially created by Holden for the show car.

Holden Chairman and Managing Director Mike Devereux said the new VF SS V show car is a class above any performance vehicle ever created by Holden.

"When it came to our sport luxury range, we wanted to create an Australian performance car that would be at home just about anywhere in the world," he said.

"We've also packaged VF's performance and technology in a stylish and sophisticated design that will be right at home on any street from George Street, Sydney to 5th Avenue, New York City.

"And this will become reality when Mark Reuss President of General Motors North America, unveils the VF Commodore as their top-of-the-range Chevrolet sports sedan at the world-famous Daytona International Speedway in Florida tomorrow."

The performance show car is a custom-finished, 'amped up' pointer to the VF sports range, to be launched mid-2013. It's muscular design is enhanced with a bespoke paint job in brilliant metallic orange, contrasted against glossy black multi-spoke wheels.

Striking exterior treatment aside, the preview gives prospective buyers an idea of what to expect when Holden's VF sport luxury range makes its showroom debut.

"We wanted to put something out there that made a bit of an impact," he said.

"The design was an exercise in exploring future options and gauging buyer reactions. We may get some polarised opinions, but that's all part of the process of experimenting with different ideas and anticipating market trends.

"The surfacing of the new VF is inherently more flamboyant and contemporary. And the fresh front and rear end sports graphics on the SS V in particular are really vibrant and distinctive.

"Factor in all the things we know and love about the Commodore – its great stance, silhouette and proportion – and we had a great canvas to work with.


"The SS V show car isn't too far removed from the final design intent – we've just amped it up a little.

"The gloss black paint on the hand-machined double five-spoke wheels is a custom finish, while the cool gunmetal chrome detailing on the front fascia and the vertical fender vents is less overt, more in tune with this car's luxury persona," she said.

"With the fusion of gloss black elements, the gunmetal chrome and that sensational orange metallic finish, we wanted to blur the boundary between luxury sports tourer and dramatic sports machine".

The theme is well-appointed sport luxury: dark-toned, subtle and sophisticated. The feel is first class. This is a carefully considered ergonomic design, defined by the use of high-quality materials, careful tailoring, craftsmanship and comfort.

Nothing has escaped attention – from the instrument panel and centre console with its advanced infotainment graphic interface to the motorsport-inspired steering wheel, the switches, the shifter and the new electric park brake.

"It's evolved from a bold approach into something more in tune with the sophisticated technological nature of this car," she said.

"The sport interior retains all the classic sports cues but pays tribute to Holden's performance heritage in a more understated way.

"We took a jet black background palette and enlivened it with silky chrome highlights and tactile, soft-textured materials.

"There's real cohesion between decorative elements such as the deck and twin needle accent stitching that's repeated on the seats, the doors and the instrument panel.

"The sports DNA may be more subtle, but it's apparent everywhere around you – from the central accent stripe on the seats to the perforated leather inserts, the carbon fibre look cross-car applique, the SS-V Series embroidered ID on the instrument panel, alloy-faced pedals and the traditional red-lit graphic displays".