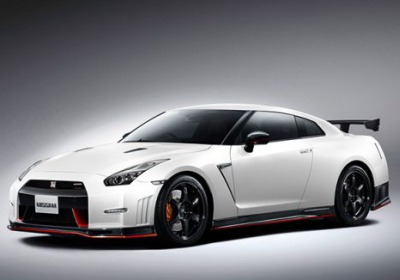 Behold the 2014 Nissan GT-R as dressed by Nismo and inspired by the GT3-spec race car that competed in this year's Nürburgring 24-hour race. Called the "ultimate iteration of Nissan's GT-R supercar," power goes up by 55 horsepower to 600 hp with updates like high-flow, large diameter turbos, and torque is "over 480 pound-feet," which means it's risen by at least 35 lb-ft.

Helping to keep it right-way up and pointed in the right direction are a race-tuned suspension with a larger, hollow anti-roll bar, custom Bilstein DampTronic dampers and the use of high-rigidity bolts. Outside, a new aero package from the wider front carbon bumper to the carbon rear spoiler above a longer, tapered rear bumper creates an additional 220 pounds of downforce at 186 miles per hour compared to the standard GT-R. Rumors of a 'Ring time of 7:08 abound, we'll get the truth - and we assume some video - very soon.

The bodyshell construction uses adhesive to improve rigidity, and behind those windows are carbon fiber Recaro buckets - in Europe and Japan, at least - and an Alcantara-wrapped wheel. It goes on sale next year, but you can get to know more about it right now in the press release below.

New, ultimate iteration of Nissan's GT-R supercar. Inspired by the Nismo-prepared GT-R that has competed successfully at the famous Nurburgring 24h race, the Nismo GT-R delivers even greater performance thanks to uprated engine outputs and advanced aerodynamics that generate over 100kg of additional downforce at 300km/h (186mph).


The Nissan GT-R Nismo will be available in Japan, U.S. and Europe in 2014.
Naturally, the Nissan GT-R Nismo has lapped the fearsome Nordschliefe race circuit in Germany. It continues to challenge the lap-times set by small-volume, hand-built hypercars...

Carlos Ghosn, Nissan's CEO, will announce the GT-R Nismo's laptime when the car is unveiled at Nissan's global headquarters in Yokohama, Japan at 19:00 on Tuesday 19th November at the celebration of the brand's 80th anniversary in advance of the opening of this year's Tokyo International Motor Show on Wednesday 20th November.