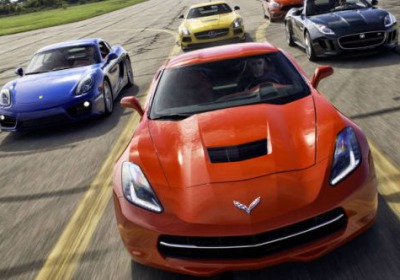 Road & Track recently staged its first annual Performance Car of the Year test, pitting 13 new and updated performance cars against each other on track, then graduating the top six to a road test before picking a winner. Additionally, the magazine staff picked the best automobiles of the year in eight categories.

To find out the results of the comparison, head over to Road & Track's website or check the press release below, where you'll also find the magazine's top-rated vehicles in eight categories. Want more? Head over to the 2013 PCotY hub. But before you do that, take a stab at guessing the winner of PCotY (we'll give you one hint: it isn't a Porsche).

PERFORMANCE CAR OF THE YEAR AWARD GOES TO THE CHEVROLET CORVETTE

NEW YORK, NY (November 14, 2013) – Road & Track today announced its first-ever "Best Cars" list, distinguishing the best new automobiles and trucks of the year. The honorees will be recognized in the December 2013/January 2014 issue, on newsstands November 19. Among the winners, the 2014 Chevrolet Corvette has been named Road & Track's Performance Car of the Year.

To select the Corvette, the editors tested 13 of the world's hottest sports cars on challenging mountain roads and on The Motown Mile, Road & Track's private circuit. A knockout formula whittled the field down to six from which one winner prevailed.

"We selected the Corvette because it represents an incredible achievement: Not only is it wickedly fast, it's now also a delight to drive on the challenging, twisty roads that used to be the car's nemesis," said Larry Webster, editor-in-chief of Road & Track. "Plus, it's a real bargain and looks fantastic."

In addition to the Corvette, eight other vehicles were selected as "Best Cars" in the following categories:

Best Luxury Sedan: 2014 Cadillac CTS – With its 420-hp twin-turbo V-6, locking rear diff (technology borrowed from the C7 Corvette), and magnetorheological shocks, the CTS Vsport is the surprise performer of the class.

Best Family Sedan: 2014 Mazda 6 – This car is as close to perfect as you can get for the money. The steering and chassis make other sedans feel ordinary.

Best Pickup: 2014 Chevrolet Silverado – A better interior, infotainment that isn't ancient or tacked-on, and a fresh take on clean, no-nonsense styling. Plus, a comfortable ride that nearly rivals the best in class.

Best Wagon: 2014 Mercedes-Benz E-Class – Our pick is for the E-class, the only true wagon sold here that offers rear-facing third-row seats. And a 577-hp twin-turbo AMG V-8.

Best Diesel: 2014 Audi A8 – The A8's TDI V-6 renders the old diesel tropes null and void. The only difference between a diesel A8 and a gasoline-fueled version, in practical terms, is what fuel goes in and what economy numbers come out.

Best Electric: 2014 Fiat 500e – The people at Fiat's electric-vehicle division must like having big fun on the clock, because this thing will chirp its tires and lay elevens all day.

Full coverage of the Best Cars of 2013 and Road & Track's Performance Car of the Year can be found in the December 2013/January 2014 issue, on newsstands now, and online at roadandtrack.com.