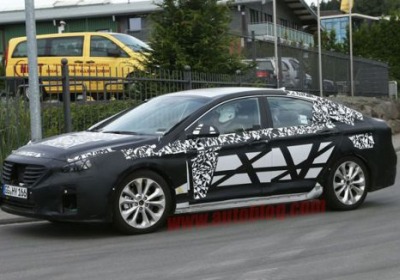 Despite receiving a host of improvements for the 2014 model year, the next-generation Hyundai Sonata is right around the corner. During a technical briefing today, Hyundai's North American CEO, John Krafcik, has confirmed to Autoblog that the 2015 Sonata will debut at the 2014 New York Auto Show in April.

The Sonata will be one of Hyundai's three major launches coming in the first half of 2014. First will be the 2015 Genesis sedan, which will bow at the 2014 Detroit Auto Show, and also coming in 2014 is a new fuel-cell vehicle from Hyundai.

Despite the current Sonata's age relative to key rivals, it's still doing rather well for Hyundai. Krafcik told us that the sedan currently has a 42-day dealer supply, which is lower than its fresher competitors. The nipped/tucked 2014 Sonata should help keep that momentum going until this all-new 2015 model arrives next year.