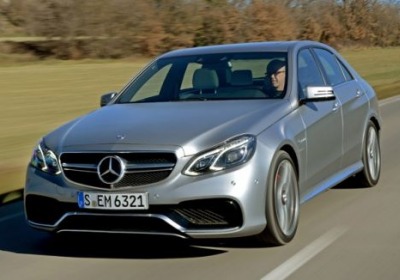 Maybe you saw our recent blog snippet on a bunch of US journos getting pulled over in the middle of nowhere in Catalunya, Spain for driving a bunch of new 2014 Mercedes-Benz E63 AMG models. By all accounts, they weren't speeding – which makes me softly guffaw. I was there in that group, yet I had taken the more direct route into the mountains from Barcelona so that I could... well, so that I could go faster. No one hassled me and I had the Autovia all to myself. And it was the goodniks – the team players – who got nabbed because Spain had decided to suddenly enforce the never enforced "must carry an international driver's license" clause of the highway code.

The departing E63 AMG with 518 horsepower and 516 pound-feet of torque from its M157 5.5-liter biturbo V8 hasn't exactly been poorly received. It isn't as crisp as, nor as pleasantly evil as its C63 AMG kid brother, but we generally accept that the heavier and larger car will always feel, well, heavier and larger.

As part of the 2014 E-Class mid-cycle redesign, Affalterbach decided to give its E63 AMG more power and torque for the occasion. The base car now gives off 550 hp and 531 lb-ft, while the hotter S version I tested (formerly the AMG Performance Pack) produces 577 hp and 590 lb-ft. The other big novelty is that E63 sedans will be available with both rear- and all-wheel drive, while all US-spec E63 wagons will be 4Matic equipped.