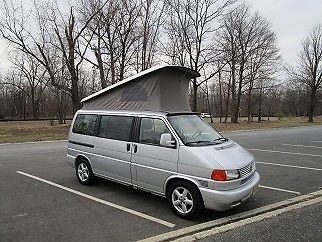 Please email me with any questions or requests for additional pics or something specific at: elena.kirchhofer@tightmail.com .

2003 Eurovan with under 62,000 original miles. Starts, runs, and drives great. Interior looks almost new, and I am
the 3rd owner. 1st and 2nd owners were mother and daughter. Transmission has just been rebuilt and is under
warranty for 1 year and unlimited miles. Van has new Vredestein Quatrac 3 tires with correct load rating, new N80
valve, coolant temp sensor and passed NJ inspection. I have service records from original owner including
transmission oil changes.
Body is in overall good shape except for scratch on sliding door that does not affect operation of door, scratch on
bumper, windshield washer cover broken and typical scrapes on body from regular use.
Got this van to replace my 93 5spd but decided to keep the 93 instead
Van has the expected dings and scratches associated with a 2003 vehicle. Also has cracked right fog light, but
light is fully operational.
Please note mileage may go up a bit since I still use the van.
Van sold as is with no warranties expressed or implied.