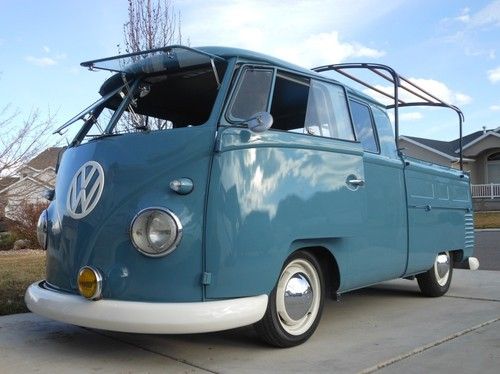 This is a very rare Double Cab since it is a first production year truck. Before 1959, Volkswagen did not make them, but had them subcontracted out to the Binz Rotisserie. This first year Double Cab has many of the Pre-60 features that make it unique even to other later Double Cabs. The most noticeable is the "seamed" gates. In 1959, VW did not have a stamp for double cab gates, so they cut gates stamped for a longer Single Cab beds and welded them together. These are the original gates!

This DC is a head turner and a multi-award winner. It has taken Sponsor’s Choice at the Lindon Days Car Show among over 100 entries VW, European and American Muscle, First Place in the Commercial Bus class at the 2012 Last Call VW Show and Sponsor's Choice again at another all makes show.

Youtube links:
A view from inside the DC taken 6-14-2013
Another earlier video driving around the neighborhood
A walkabout the truck Part1
Walkabout Part2:
ON I-15 headed to a VW show(my wife is narrating and I didn't shut my driver's door all the way.)

Body: It is about 80% original metal. It has had the sides above the rear wheels replaced using Gerson replacement metal. It is painted the original Dove Blue and the wheels, bumpers and symbol are painted Silver White. All rust repair and paint was done professionally. This was finished just in April of 2012. Complete assembly of the truck in June of 2012. It also has the original apron and decklid. The bed and gates are Original and good shape.

All new rubber throughout! Doors seals were installed per factory specs as described on dropgates.com. All new windows seals and felt. All New popout window seals.

Suspension and brakes: The front end is a non-narrowed Busboys adjustable beam. Rear end has had the reduction boxes removed and has a 1967 beetle axle in it. All the brakes have been redone with new pads and cylinders and soft lines. Wheel bearings were replaced  3 years ago.New lower transmission mounts and tranny fluid. For tires it has 155/60/15 up front and stock 165’s on the rear.

Interior: Sand blasted, primed and painted seat frames. Kombi Kovers seat covers (The best possible match to original commercial bus seat covers installed as original. No hog rings). The pebble pattern is the best match available to factory vinyl pattern and even the thread color is the same as it wasn when it rolled off the line in 1959. The interior panels are as close to factory specs as possible and are painted in the correct commercial gray. The front door panels have original VW pockets in them. Another Pre-60 feature are the correct Original Ribbed interior door handles with black escutcheons. Dash is uncut. The roof, doors and smuggling compartment have Second Skin Damplifier Pro lining to reduce road noise and rattle.

Stereo: This truck POUNDS. 1000W, 5 channel amp. Pushes 450W Class D to 1 Alumapro BP-12 Sub (all hidden from view). Running Alumapro ALC 5-1/4 Component speakers in custom pods up front. NO HEAD UNIT!!! This baby uses an AudioControl Three.2 Line Driver/EQ and runs directly off of AUX. (Has 3 AUX inputs). Plug your iPod, iPhone, Android, whatever. Must be heard to be believed.

Seamed Gates- Since VW did not have side gates for the DC this early on, they took single cab gates and cut them down. All the gates are original to the truck.

Six fuse wiring harness- original to the DC. Changed in 1960

Fog Lamp- From what I understand this was dealer optioned. It has a correct switch on the dash for it and works great!

Original Clear Needle Speedo with all correct and rare screw bulb connectors not the modern slip on ones. Steering wheel, turn assembly/knob and horn button are all original.

Front and Rear Safaris Windows- Fronts are Izzy and Rear is Wolfgang.

Correct "Slash" Bumpers, front and back.