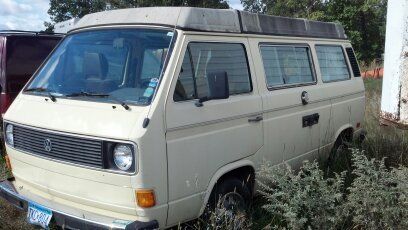 VW camper bus in pretty nice complete condition.  Engine was rebuilt at 160000.  Parked in the machine shed after a trip to Alaska in 2007 and haven't used it since.  Engine turns over  but won't start, don't have time or desire to investigate. Drove it out of the shed a year and a half ago been sitting were it at since then,  Tires hold air.  All the camping stuff worked well on Alaska trip.  Interior is pretty nice, no tears or worn out parts. No rust. Pop top works well and canvas is good.  I'm sure everything needs to be gone through since it has been sitting for the past 5 years, so somebody is going to get a good deal  So it is sold as-is.  I have a truck and trailer so can deliver it to you  for a $1 per mile if you are within a reasonable distance.