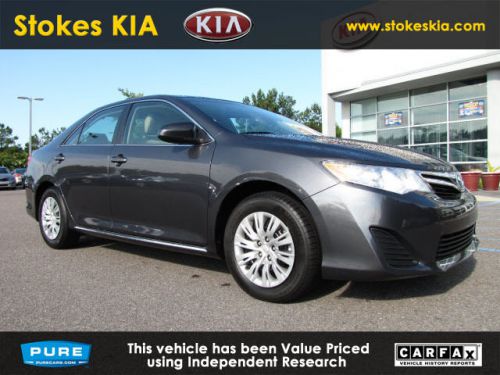 STOP! Read this! Welcome to Stokes Kia! Stokes Kia is honored to offer this wonderful-looking 2012 Toyota Camry. Need a fuel-efficient car with rock-solid reliability? This dependable Camry LE will do the trick in style! Car And Driver counts it among the top ten best sellers. As you do your comparison shopping, you will see Stokes Kia offer some of the best values in the market. We will provide you a Carfax, Comprehensive Vehicle Inspection, and how we arrived at the price. We may not be the lowest, but if you want to know who is we will show you that too. Call or Stop by Contact Stokes Kia at 888-355-7122 in Charleston, South Carolina. Excludes tax, tag, registration and title and includes $399.50 Administrative Fee. Prices do not include destination charges, dealer add-ons, tax, license, and does include $399.50 Administration Fees. We offer the largest selection of used vehicles in the Carolina's with the best pricing out there. If you don't believe us, give us a call and we will show you.